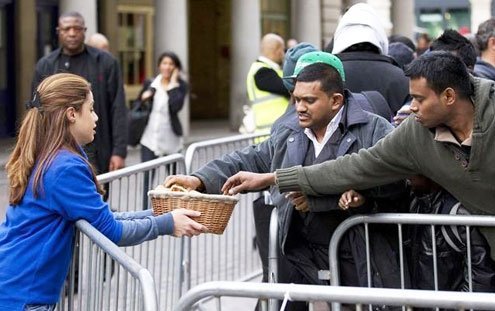 Irony of ironies: feeding iPhone-waiting customers in line in London.
B

efore consumerism, lines of people — queues the British call them — were signs of literal hunger. There were breadlines, soup lines, lines to collect stamps to help with essential purchases. There were also emergency lines, for tickets out of war-torn countries, for trains and buses, for a precious place on a packed boat. The goal of the patient waiting was to eat or to escape. Patience itself was an accepted part of survival’s fundamentalism.

But access to money, often hard-earned, gradually engendered middle class affluence, a now-global reality. Lines were fewer, and so were the hungry. Man-made emergencies dwindled in both regularity and scope.

In the postwar West, lines took on a different meaning, associating less with basic need than the desire to possess the popular, the faddish, to emphasize the need to belong. Events, not necessities, made people wait all night. They waited for tickets to the next big thing, in both sports and culture. A life of subsistence set aside, diversion was the new need, one that money both encouraged and allowed, rounding out the capitalist axiom.

In 1968, my father lined up on my flu-ridden behalf to buy a copy of the Beatles’ White Album. He had been a witness to lean times, the Depression and World War II, and the priority shift represented by these new lines left him wide-eyed. Waiting for hours to pay and possess slivers of singing vinyl seemed to him a spectacular indulgence. When he brought back the album he also returned with a dizzying array of anthropological observations, mostly about need’s graduation from ensuring survival to acquiring status. I ignored him and listened to the music.

Among the songs was “Back in the USSR,” a charming Soviet parody that turned apt a few decades later when communism collapsed under the weight of its inability to keep up with Western Joneses, who in the 1980s — finally unfettered by modesty — ramped up the gospel of ownership. Soviet propaganda about the American poor and dispossessed lost traction as the non-Communist world invented and peddled a host of magic toys that only money could buy, the same money the Iron Curtain East had scoffed at for decades, until its own bread and belongings lines grew too long and unruly.

All wanted into the middle class life and into the culture of ownership, the possession of the newfangled becoming a key ingredient of modern personality. And most of those who wanted in have made it in, at least in the world’s urban venues. People still stand in line to buy food, but checkout counters have replaced bread charities, with the bigger money set aside for pretty products whose obtaining is an adjunct of consumer accomplishment, and with it status.

Though few waited in line for new washing machines, many now do for the miracle devices on which aspects of their lives depend. The iPhone 5 recently went on sale in Italy, 10 days after the United States, with nationwide buying lines making newspaper and web headlines. “Never mind the recession,” read one such headline, “the new iPhone is here.”

Images of the lines showed the grinning faces of mostly young customers holding their prized new ($1,000) devices. It seemed all at once like yet another fitting if egregious farewell to the millennia-old waiting for gruel. And a goodbye also to waiting to cultural satisfaction (the “White Album,” say), since part of the purpose of connective technology is to make longing itself obsolete by transforming hand-held devices into machines that “solve” or offset need by linking individuals to a sleepless collective that invariably has some kind of solution to every kind of problem, and can celebrate both excitement and frustration. It’s a kind of digital socialism manipulated by cravings. A smart-phone is food, if not lodging, a thing whose ownership ensures confident belonging as much as a home once did. The last such powerful enchantment was the cigarette, which cut across class lines but also involved the act of holding and controlling something, and establishing personality, or seeming to.

Hands that once clutched scythes and spears, cigarettes and guns, or were cupped for alms, now cradle an intimate stand-in for human location.

After waiting in line for the “White Album,” my aging father, by then nearly 70, mentioned he’d met an elderly woman in line to purchase the record for her granddaughter, who was away on a camping trip. The woman seemed a little embarrassed, or so my father said. For her, the acquiring of the Beatles’ Holy Grail seemed at least unrealistic.

“It feels a little silly waiting for hours for a record,” she told him, to which my father asked why.

“Well, the truth is, we don’t even own a record player.”

My unsettled world still contained a few middle class “withouts,” people with color TVs but no signal. That landscape since been “cured” by availability and entitled ownership, surefire reasons to assume that sooner or later the thing-driven global economy all wanted (but many still seemed depressed with) will once again find its bearings.