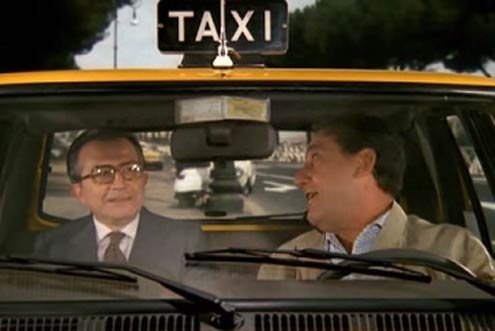 veryone has sfizi, or guilty pleasures. I love chocolate. And please pass that glass of wine after a long hard day at work.

But among my other guilty pleasures — and this might sound weird — is taking a Rome taxi. Can a cab actually qualify as a guilty pleasure? After all, Roman cabbies (or some of them) have an unsavory reputation for ripping off tourists, charging high prices, and staging wildcat strikes.

I have a love-hate relationship with Rome cabs. Since I live a ways away from the city’s centro storico, the historic center where my office is located, my daily commute is tedious. I’ve tried everything, and I mean literally everything, to make the trip more comfortable, or just to take off the edge. My apartment isn’t near a Metro stop, so the bus is my only practical option, and the cheapest one. But it’s also the hottest, stickiest, sweatiest and smelliest.

In general, Rome bus riders are angry, tired, stressed and ready to fight. Who can blame them? Try spending more than an hour on a non-air conditioned bus with someone’s armpit in your face and possibly someone groping you from behind — all this while protecting your wallet and dealing with cute little old ladies who make up puppy-dog faces to convince you to give them your seat. I just don’t have enough caffeine in my system to fight them. True, the bus only costs a buck (well, now it’s €1.50), but it can all wear thin.

I’ve sampled alternatives, including taking the airport train that runs near my home and stops close, or somewhat close, to the city center (Trastevere, Ostiense, say). But I gave up after a couple of times trying to cram my way into packed cars (think sardines or Japanese subways).

I’ve also tried driving, which I do more of these days. But finding prime-time parking is guerrilla warfare. I have to leave my house by 7:15 a.m. at the latest. I get to work a walking zombie and it shows.

If I do make it out by 7:15, I miss the brunt of traffic (unless it rains) and also usually find a decent parking spot along Lungotevere. But I loose sleep the night before and my anxiety is sky-high. I’m always worried a moped will clip a mirror, or worse.

Which brings me to cabs. No, it’s not something I could do everyday. And yes, it’s expensive and not always pleasant (especially when the cabbie insists on keeping the A/C off in summer heat because he’s worried about catching cold from the draft). But at least I’m armpit free, don’t have to fight for a seat, and sleep better the night before. If I’m lucky, I also end up with a talkative cabbie who has a story or two. Most of my friends think I’m nuts. Maybe I am, but cabbies can make me laugh.

Take Gino, a 75-year-old driver from Perugia who told me he’d been living in Rome since his twenties. I’m a bit biased towards to older drivers. They seem fairer. As soon as I hopped into Gino’s cab he started singing. Happy Gino insisted on telling me all about the people he’d ferried around, including policemen, tourists, politicians, actresses, and even prostitutes. He’d seen it all and some of his anecdotes were memoir-worthy. He even told me he’d had bit parts in films and TV commercials… as a cabbie.

When we approached my neighborhood, in the Salario/Serpentara section of Rome, he asked me if I knew why the area was called “Serpentara?” (serpente means snake). I had no idea. According to Gino, the neighborhood was unapproachable as recently as early last century. Shepherds wouldn’t even graze their sheep there. Why? Gigantic snakes, of course. Then, businessmen and contractors saw potential in the neighborhood and began coming up with building plans. But what to do about the snakes? According to Gino, the interior ministry intervened, first using gas and later by setting snake-killing brushfires.

The other day I rode with Fabrizio, who was much younger than Gino. He told me his whole life story, where he’d traveled, why he became a cabbie, where he saw himself in a few years. He even told me about how he nearly seduced his best friend’s girlfriend. He had the chance — she was game — but not the courage.

Yes, I did think to myself: “How did we even get on this subject, and why would I even want to know about this guy’s love triangle?” It sounded like something out of HBO’s “Taxi Cab Confessions.”

But that’s exactly why I love riding in Rome cabs. For cabbies, lives are stories, and all they want to do is tell you about them.