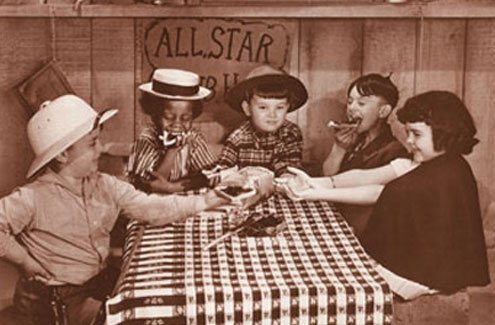 Peaches, pumpkins and rascals.
I

n February, affection often comes by way of a bright bouquet or a heart-shaped box. But what most intrigues me is the way food so often inserts itself in language to proclaim love or describe emotions.

My favorite lines came from Lucille, a sales clerk in an L.A. fabric store I once went to often. A southerner and a wizard at finding the perfect material for any creation, she browsed the bolts and spun wooingly sweet Georgia banter. “Over heah, sugah cakes, now this is special.” “Not that one, honey dumplins’, this one.” “Hey, chocolate-drop, I think we’ve found it!” If you ever felt blue, Lucille would let you know you were loved.

When I visited my large and bosomy southern grandmother as a child I’d be welcomed into her ample arms with a “Come over heah, you little rascal, and give me some sugah,” a substance clearly residing behind my ears, both of which she nuzzled and kissed until I was sugared-out. She would stroke and pet my cousins and me, murmuring, “You kids are sweet as honeycombs.”

Except when we weren’t, which got us: “You bad kids are just the devil in my devil’s food cake, and you’re not gettin’ any unless you shape up!”

When I married — on Valentine’s Day no less — affectionate endearment expanded. “My little dumpling,” “cupcake,” and “sugar pie” took on new meaning. “Honey pot” took up residence along with “sweetie-poo” — and I wouldn’t change it for the world. “Do you think I’m getting fat” was almost invariably met with, “Why, no, you little butterball.”

Italian has its own sweet terms of endearment. Amore, caro, bambola and tesorino — lover, dear, doll and treasure — are the ones least related to food. For the hungrier there’s dolcezza and il mio cipollino, with ciccio for children. Not to mention il mio piccolo carciofo(my little artichoke) and bella bon-bon. Missing is il mio piccolo tiramisù and la mia torta della nonna, which isn’t to say they wouldn’t work. Maybe Italians visualize love on plate more readily than in bed.

In France, where we spend some of our time, I revel in mon petite chou (which I’ve learned is pastry, not cabbage), mon sucre d’orge (my barley sugar), ma petite poule (hen), lapin (rabbit), or caille (quail), all of which can become luscious plats du jour to be pleasurably nibbled on and savored.

The irony is that the word “sweet” — at least in my south — was often the worst thing you could say about someone, as in, “Oh, I just don’t know what to say about her, but she’s just so sweeeet,” the vowel drawn out to make it clear the compliment was anything but. To this day my antennae go up when I hear someone described in English as “sweet,” woman or man.

But language can throw a curve ball from time to time. I recently learned that the French translation for American-style muscled and washboard abs is (of all things) … tablette de chocolat.

I might just have to take another look at desserts.