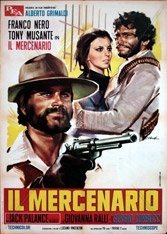 Sergio Corbucci was in many ways Sergio Leone’s sidekick in the 1960s Spaghetti Western revolution. With the likes of the “The Good, The Bad and The Ugly” and “The Great Silence,” the duo shot down the flavorless American Western, ushering the shopworn genre into an era of palpable grit and sharp wit. Helped by the remarkable talent of composer Ennio Morricone, films such as “Il Mercenario” — released in English as both “The Mercenary” and “A Professional Gun” — set a tone for action and gangster cinema that would last for decades to come.

Here, steely-eyed Franco Nero grew his finest beard to star as no-nonsense mercenary Sergei Kowalski. He teams up with a pack of Mexican revolutionaries headed by rough idealist Paco Roman (Tony Musante) to take down bourgeoisie overlord Curly (Jack Palance). Roman holds the heart of the people but Kowalski has the brain of a General — for the right price of course.

Corbucci teases out gun-toting brilliance until the stunning final showdown. The camera shoots eye-to-eye, with Roman’s clown make-up adding a lick of crimson and Curly’s uneasy glare threatening to betray his bravado. It’s one stage for both their fates, all at the ring of a bell pulled by the narrator himself, Kowalski.

Corbucci balances extravagant drama and flavorsome black comedy. Whether it’s razor-edged one-liners or Kowalski’s divine power over dice in a craps game, this is a film at one with its genre. Add the wilting wonder of Morricone’s score and, plot hiccups aside, you get beautifully worked and operatic work of cinema.