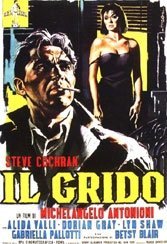 Wanderlust can strike suddenly and send a person flying. It’s the same with heartbreak. After a harsh end to his seven-year affair with a married woman, the only thing grieving Aldo (Steve Cochran) wants in Michelangelo Antonioni’s “Il Grido” (“The Outcry”) is new meaning. So he wanders. Only problem: new meaning’s nowhere to be found in the barren Po Valley.

This isn’t cryptic like Antonioni’s later works. It’s straightforward and sad. Irma (Alida Valli) could marry Aldo now that her husband has died, but flees instead. Begging, crying and face-slapping doesn’t get sentimental Aldo much. Irma’s rigid where Aldo’s a mess. He takes off by foot with their young daughter Rosina (Mirna Giradi) and cartwheels through a series of sloppy jobs, sloppy affairs. First affair is old flame Elvia (Betsy Blair). She’s flattered by the renewed attention of handsome-jawed, grunting Aldo, until she learns it’s only because he’s been spurned.

Nobody wants to be a second-rank lover. Elvia kicks Aldo and little Rosina to the curb. Rosina’s getting antsy with no school and nothing to do, but Aldo’s too consumed by the vast and treeless voodoo of the valley to notice (cinematographer Gianni di Venanzo’s work is at its most sensuous here). Aldo has another run-in with a woman, this time Virginia (Dorian Gray). Virginia’s loneliness has made her all attitude and ardor — a lumberjack at heart, but she settles for pumping gas. It’s when Rosina catches the two in an erotic embrace that Aldo realizes how his derelict lifestyle might be destructive. In a single stroke Aldo ships Rosina back to her mother and abandons life with Virginia.

Antonioni, whose meditations on troubled relationships are rarely forgiving, lets Aldo have his come-to-Jesus moment and heads back home. There, Aldo haunts Irma like a ghost. Irma may be ready to feel regret by now. But given Aldo’s fate, it won’t matter.