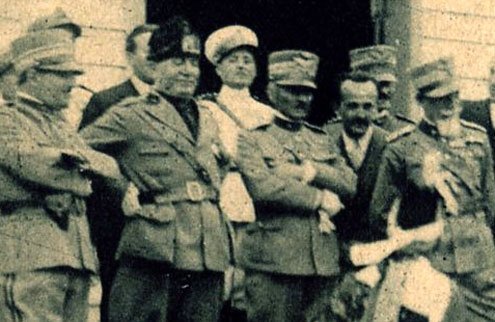 Caption as it read in Current History: "Mussolini, with arms on his hips, photographed during his visit to Tripoli. Mr. Winner, the writer of this article, stands next to the officer at right of Mussolini in the photograph."
I

n July 1928, my father Percy Winner, then foreign editor of the New York Evening Post, published a lengthy profile of Italian dictator Benito Mussolini in Current History, a magazine founded by The New York Times in 1914 that still exists today. The report, entitled “Mussolini, A Character Sketch,” plucked anecdotes and insights from my father’s time in Rome in the early and mid-1920s, when he had worked for the Associated Press.

“He adores publicity and gloats openly, childishly, in the interest he produces,” he wrote of Mussolini. And elsewhere: “A line could be drawn between his desk and the door with indications of the probable quality of the reception, enthusiastic near the door and frigid at the desk.”

Details had substance: “The Mussolini legend is jealously guarded. He is never ill or tired. The serious duodenal ulcer which kept him in bed for fifty days was dismissed as a trifle. No newspaper was permitted to say that for more than a year he virtually lived on milk and crackers. In his eyes there was something unvirile about such a diet. But he saw something dignified and fine about his endlessly described simple food and abstinence from tobacco and strong drink.”

An admixture of reasons, including the profile, his cocktail party mingling with Count Galeazzo Ciano, the Fascist foreign minister, and his close friendship with chameleonic author Curzio Malaparte, made my father the only American journalist investigated by the Red-baiting McCarthy Commission as a putative Fascist. The commission’s abortive probe was rooted in the length of my father’s Italian stay, nearly a decade during the interwar period, and the fact that he had traveled with the dictator to Abyssinia, now called Libya.

The ambiguity of my father’s relationship with Mussolini and the intellectuals within his coterie was something of a mystery to me until I found and read the coda of the Current History piece, entitled simply: “Story of an Interview.”

Unconnected to the substance of the profile, it got to the core of a different complication, that of weighing nuance in the assessment of powerful men and the country’s they ran, or pretended to.

Such nuance was substantive before visual hyperbole and tympanic talking scrapped ambiguity. Gradation has since been shipped out as a wasteful distraction from the yin-yang extremes of cynicism and sentimentalism that represent the lodestones of today’s bipolar, paparazzi journalism.

My father was 22 when he met Mussolini for the first time, at Palazzo Venezia in Rome. What follows is the unabridged text of “Story of an Interview,” which if nothing else provides cagey insight into the life and times as a man whose enduring reputation is as he would have wanted it to be — outsized, and as such ideal fodder for generations of historians to come.

“In the summer of 1920, having been granted an interview with him, but having learned that its text would be written, as is the case with many Mussolini articles and interviews, by one of the attaches of the Press Bureau, I secretly asked permission to write it myself. I produced 3,500 words of what I considered Mussolinian text and submitted it. A few days later it was returned to me, approved, somewhat reduced in length but otherwise unchanged.

“The next day Mussolini received me. His first words were: ‘I have given you a long and important interview, one of the most important I have ever given an American.’ No one told him I had written it. No one dares to tell him half the truth of what is daily going on in Italy. Anything which can be interpreted as a complaint or a suggestion may mean instantaneous dismissal.

“Nothing can attest better to Mussolini’s appetite for flattery than the fact that daily for years he has been in contact without nausea or even annoyance with a never-ending stream of cringing, fawning men. He has seemingly been unaware that thousands of men have lain awake nights thinking of means of reaching him without adroit adulation.

“Mussolini’s vanity and maladif fear of ridicule, however, cover a very real, a very sensitive, warm and loveable personality which shows itself at rare moments and which has been my privilege to know. The rare moments come when he forgets that he is alone against the world. Then he is tired and haggard or, more often, boyishly affectionate, kind and human.

“One day in Tripoli after we had crossed many miles of desert, Mussolini was conducted into an experimental horticulture station. By chance, I was at his side when he suddenly found himself surrounded by beautiful flowers. ‘Flowers,’ he exclaimed; then, turning to me, added, his face shining with pleasure: ‘What joy, to think I may be helping to bring flowers from the desert.'”