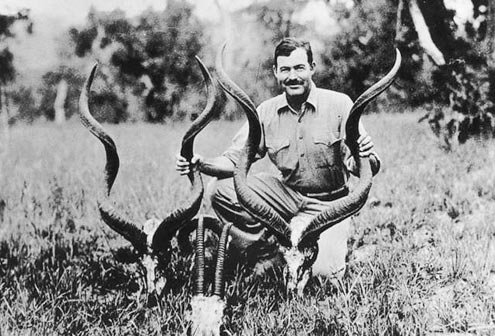 Hemingway and his prized kudu in 1934.
I

used to know Mussolini. Nobody liked him then. Even I didn’t like him. He was a bad character. Ernest Hemingway, “They All Made Peace — What is Peace?” 1923.

Ernest Hemingway and Benito Mussolini had a few things in common. Both men were wounded in defense of Italy during World War I; Mussolini in 1917 while fighting with the Italian Army on the front at Carso, and Hemingway in 1918 by Austrian mortar fire while distributing cigarettes and chocolate to Italian soldiers as a Red Cross volunteer. Both recovered at respective Red Cross Hospitals in Milan, and were later decorated by the Italian government for their war heroics.

Both were also newspapermen. Before the war, Mussolini edited the Socialist paper Avanti before founding his own publication, Popolo d’Italia. Fresh out of high school, Hemingway took a job as a reporter at The Kansas City Star. After the war, he continued his journalism career as a Paris-based foreign correspondent for The Toronto Daily Star.

Hemingway and Mussolini first met in Milan in 1922, while the former was enjoying a belated Italian honeymoon with his first wife, Hadley. When the 23-year-old reporter heard that Mussolini, then leader of the National Fascist Party, was also in town, he brandished his Daily Star press credentials and finagled an interview.

The resulting dispatch, “Fascisti Party Half-Million,” ran in the Daily Star on June 24, 1922. In it, Mussolini bragged to Hemingway “the Fascisti are now a half a million strong” and “have force enough to overthrow any government that might try to oppose or destroy us.”

Despite such chilling vigor, Hemingway gleaned a softer side of Mussolini as he sat in his “editorial chair” at the Milan offices of Popolo d’Italia “fondling the ears of his wolfhound pup.” Perhaps seeing a bit of himself in the Fascist leader’s “intellectual” face, and aware that Mussolini, too, had “drifted into journalism” and was “decorated for valor” in war, Hemingway opined that Mussolini, “a patriot above all things,” had gotten a bum rap: “He was a great surprise. He is not the monster he has been pictured.”

When the two met again at the 1923 Peace Conference in Lausanne six months later, Hemingway’s fondness for Mussolini — who was now “Il Duce” (“The Leader”) after orchestrating his March on Rome coup d’état — had significantly deteriorated. “If Mussolini would have me taken out and shot tomorrow morning, I would still regard him as a bluff,” Hemingway wrote in a January 1923 Daily Star report headlined, “Mussolini, Europe’s Prize Bluffer.”

At a time when the Western consensus was championing Mussolini’s potential to rehabilitate postwar Italy, Hemingway branded the Duce as “coward” with a “genius for clothing small ideas in big words.” He then reduced the “clothing” metaphor to a literal Blackshirt insult (the Blackshirts — camicie nere or squadristi — were fascism’s paramilitary force): “There is something wrong, even histrionically, with a man who wears white spats with a black shirt.” But for Hemingway, one of the most revealing examples of Mussolini’s shifty character came when he spied the Duce at a press conference absorbed in a book: “I tiptoed over behind him to see what the book was he was reading with such avid interest. It was a French-English dictionary — held upside down.”

In a 1951 letter to his biographer Carlos Baker, Hemingway maintained that his disdain for Mussolini and the grisly tactics of fascism had been unequivocally solidified in 1924 following the June kidnapping and murder of the outspoken socialist lawmaker and rabid Mussolini and Fascist critic Giacomo Matteoti. No proof was ever produced linking Mussolini directly to the killing, but for Hemingway and many others the unseemly incident carried Il Duce’s fingerprints.

After Hemingway left the Daily Star to devote himself solely to creative pursuits, a new medium to air his anti-fascism was born. In 1927, The New Republic magazine published Hemingway’s short story “Che Ti Dice La Patria” which chronicles a trip the writer took through Fascist Italy with his friend, Guy Hickok. In the Ligurian city of La Spezia, a restaurant meal is interrupted by waitresses who take advantage of Mussolini’s abolishing of the brothels and double as prostitutes (“The girl who took our order put her arm around Guy’s neck while we were looking at the menu.”) Leaving the city, the two men are shaken down by Fascist bike cop for having a muddied license plate (“Your car is dirty and you are dirty too,” says the cop.) “In such a short trip,” Hemingway concludes, “we had no opportunity to see how things were with the country or the people.”

Given Hemingway’s vocal contempt for Mussolini, it was hardly a surprise that his 1929 novel, “A Farewell to Arms,” was banned in Italy. Loosely based on Hemingway’s World War I experiences, the author’s portrayal of the chaos within the ranks of the Italian Army was called a fabrication and perceived as an attack on the Italian character. It was not until 1945, after Mussolini’s death and the end of World War II, that the novel was finally published in Milan, where Hemingway and Il Duce had first met.

Mussolini might not have admired Hemingway’s book, but one colorful if never confirmed anecdote suggests that he was quite enamored with the trophy head of a kudu, an African antelope, that Hemingway had shot while on safari in Tanganyika in 1934. Mussolini allegedly sent Hemingway a blank check for the kudu with instructions to fill in whatever amount he wished. Upon receiving it, Hemingway scrawled, “Shoot your own” on the check and promptly sent it back.