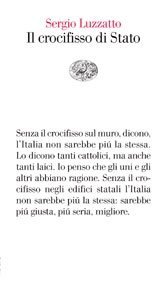 #8220;Without the crucifix on the wall, they say, Italy would no longer be the same. I agree… it would be fairer, more serious, better.” These words grace the cover of Sergio Luzzatto’s compelling polemic against the “crucifix of the state.”

In Italy, no public building — be it a police station, courtroom or classroom — is without a crucifix appended to the wall. Many have argued that its presence is innocuous, or a matter of traditional identity rather than religious proselytizing. But whose identity? Certainly not that of Italian Jews like Marcello Montagnana, who raised the issue in the 1990s; or his wife, Maria Vittoria Migliano, whose opposition to the omnipresent symbol began in the 1980s. Or the growing number of secularists and non-Catholics who see in the state-sponsored crucifix a flagrant violation of Italy’s constitutional secularity and their right to freedom of conscience.

Luzzatto, who teaches modern history at Turin University, recounts the history of this ubiquitous Catholic symbol beginning with its rise in the Middle Ages as the signifier par excellence of discrimination against heretics, Jews and Muslims. Given its lengthy history of intolerance, it’s ironic that today’s Vatican wishes to pawn it off as the equivalent of a pizza margherita: bland, neutral, inoffensive. Even worse are the politicians who can’t agree on anything but the need for the crucifix — right, left and center all fall in line the moment the pope raises an eyebrow. This is astonishing for anyone familiar with the exceedingly partisan nature of Italian politics.

Author Natalia Ginzburg, according to Luzzatto, furnished the “Ur-Text” of arguments in defense of the crucifix. Her 1988 article was published in L’Unità, the official newspaper of the Italian Communist Party, and has been mined for decades by those wishing to preserve the public exposition of the crucifix. For Ginsburg, the crucifix is “silent,” “represents human suffering” and — perhaps most egregiously — “has always been there.”

Well, no, it hasn’t really. Luzzatto demolishes the inconsistency of Ginzburg’s thesis. The crucifix was affixed to the public wall at a precise moment in Italian history. It became a mandatory presence under Mussolini’s Fascist state. How’s that for benign, silent, universal? This book is a welcome corrective to such historical myopia and — for lack of a better term — bad faith.