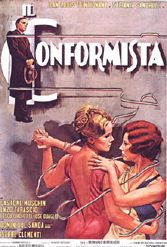 This Italian gem set in the 1930s fell into history’s cracks when “The Last Tango in Paris” was elevated into Bernardo Bertolucci’s defining moment. A pity because Jean-Louis Trintignant’s performance is true to the compulsive ambiguity of Alberto Moravia’s novel. Trintignant is Marcello, a bourgeois Fascist who so desperately wants to prove his worth to the ruling party that he’s willing to commit a murder in Paris on its behalf.

But Marcello’s real self has been mislaid, or waylaid. He’s focused only on his intellect, his Oedipal woes, and his contempt for his fiancée (Stefania Sandrelli). He’s also captivated by the wife of his intended victim (Dominque Sanda). He conforms so extremely, so seamlessly, so unthinkingly that he no longer belongs to anything or anyone except perhaps opportunism, losing contact with reason and reasons. Fascism is first a convenience and finally a complication.

Vittorio Storaro’s camera closes in on Sanda’s face in ways that are breathtaking but never safe. Bertolucci was not yet 30 when he made this. Find it; see it.