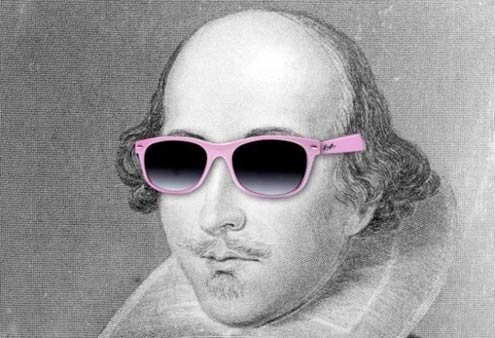 ebating the legitimacy of Shakespeare’s authorship is intriguing and eternal. Some insist it’s impossible that Shakespeare was actually Shakespeare, born in 1564 to a glover and a farmer’s daughter in the unremarkable English tanning town of Stratford-upon-Avon. A plebe and scrubby actor who shot to fame as London’s preeminent playwright under the royal patronage of Queen Elizabeth I and King James I.

Shakespeare’s modest education and lack of continental travel, skeptics contend, don’t square with the nimble linguistics and universe of knowledge contained in his sonnets and plays. On paper, Francis Bacon, Ben Jonson, Christopher Marlowe, Sir Walter Raleigh, and even Queen Elizabeth herself all make a better Shakespeare than the one hailed “Bard of Avon.”

Among the more entertaining recent theories was first advanced by retired literature professor Dr. Martino Juvara in his 2002 book “Shakespeare Era Italiano.” Basing his theory on research conducted by two University of Parma professors in the 1920s, Juvara posits the inconceivable: William Shakespeare was Italian. The greatest writer in the English language hailed from Messina, a port town on the sultry isle of Sicily.

In 1588, so Juvara’s theory goes, 24-year-old Michelangelo Florio Crollalanza, desperate to escape the Spanish Inquisition, fled Italy for England (Sicily was under Spanish rule at the time). Crollalanza’s father, Dr. Giovanni Florio, a physician, was a Calvinist facing criminal charges for publishing heretical propaganda denouncing the Roman Catholic Church. On the run since Crollalanza’s youth, the family eventually made it from Messina to Treviso, near Venice. There, Inquisition officers eventually caught up with and killed Florio.

Crollalanza left for England soon after his father’s death, taking with him a distinguished letter of introduction written by his good friend, the Dominican friar and doomed philosopher, Giordano Bruno. Intended for both the Earl of Pembroke and the Earl of Southampton, two of Shakespeare’s benefactors, the letter requested patronage on behalf of the mysterious literary refugee who bore it.

Once in England, young Crollalanza was taken in relatives of his mother, Guglielma Crollalanza, a Sicilian noblewoman whose family had been in England for some time and had adopted the English equivalent of their surname, Shakespeare (crolla literally translates to “shake,” and lanza, or lancia, to “spear”). Michelangelo did the same and further Anglicanized his new identity by assuming the first name of a deceased Stratford cousin. Just like that, William Shakespeare was born.

Given that scholars remain notoriously stumped by Shakespeare’s intimate knowledge of Italy, Juvara’s claim has a convenient whiff. Fifteen of his thirty-eight plays are set, some with astonishing detail, in Italy. A fair number — “The Taming of the Shrew,” “Romeo and Juliet,” “The Two Gentlemen of Verona,” “Othello,” and “The Merchant of Venice,” to name a few — unfold against the backdrop of picaresque northern Italian towns. A painstaking tally taken by “Shakespeare and Italy” author Ernesto Grillo found that Shakespeare mentioned Italy an astounding 800 times in his plays. Grillo maintains Shakespeare had a “profound knowledge of Milan, Bergamo, Verona, Mantua, Padua, and Venice,” that could only have been derived “from an actual journey through Italy and not through books.”

Shakespeare’s grasp of Italian is also puzzling. Where, if at all, did he pick it up? Despite Ben Johnson’s assertion that Shakespeare “hadst small Latin and less Greek,” Latin, and possibly some Greek, were part of his curriculum at King Edward IV Grammar School, which he attended from the ages seven to 14. Italian, however, was not.

Yet pure Italian is spoken in a few of his plays. “Alla nostra casa ben venuto,” says Petruchio in the “Taming of the Shrew.” “Molto honorato signor mio Petruchio,” Hortensio replies. “Love’s Labour’s Lost,” which is rooted in the Italian theater tradition of Commedia dell’Arte, and features accurate descriptions of Italian customs and laws, espouses a popular Venetian proverb: “Chi non ti vede, non ti pretia” (“He who does not see you, cannot appreciate you.”)

Moreover, many of Shakespeare’s plays and sonnets were directly influenced by Italian-language works. “All’s Well That Ends Well” and “The Merchant of Venice” can be traced to Boccaccio’s 14th century allegory, “The Decameron.” “Romeo and Juliet,” “Twelfth Night,” “Much Ado About Nothing,” and “Cymbeline” are all derived from the stories of Matteo Bandello. “King Lear” and “Othello” are indebted to Ariosto’s “Orlando Furioso.”

It’s even possible that Shakespeare’s sonnets would not exist without the precedent set by the illustrious poet Petrarch. In fact, the sonnet itself is a medieval Italian invention.

English translations circulating in London might account for Shakespeare’s prodigious knowledge of Italian lit, but what about “Othello”? One of Shakespeare’s finest plays, it tackles highly Italian themes – passion, sexual obsession, and revenge. Shakespeare’s source for “Othello” was the story “Un Capitano Moro,” or “A Moorish Captain,” from “Gli Hecatommithi,” written by Giraldi Cinthio in the mid-1560s. (“Measure for Measure” was also taken from Cinthio). But no English translation of the story existed during Shakespeare’s time. Ay, there’s the rub, Prince Hamlet would say.

Enter Crollalanza, a well-connected Italian from a noble, intellectual family, rigorously educated in Venice, Padua and Mantua, and a continental traveler with stints in Denmark, Greece, Spain, and Austria under his belt (all except Spain are settings of Shakespeare plays). Not only would Crollalanza have known Cinthio, as well as Shakespeare’s other literary sources, but Juvara cites evidence that, in the Veneto, Crollalanza lived with his family at Casa Otello (“Othello” lacks the “h” in Italian). The house was named for its former owner, a Venetian mercenary who murdered his wife in a jealous rage.

Coincidental, too, is the fact that Crollalanza is reputed to have fallen in love with a 16-year-old Milanese countess called Giulietta. Because her aristocratic family was opposed to their relationship, they sent her off to Verona, where she was kidnapped by Inquisition henchmen who pinned the crime on Crollalanza. When Crollalanza failed to rescue her, Giulietta committed suicide in despair.

Then there is “Tanto traffico per niente,” a play written by Crollalanza in the Sicilian dialect. In English, the title translates to “Much Ado About Nothing,” one of Shakespeare’s most celebrated comedies. It is set entirely in Crollalanza’s birthplace of Messina.

Despite these tempting shards of evidence, what remains entirely problematic is Crollalanza’s breathtaking mastery of English. The saying purports that behind every great man is a great woman, and in Crollalanza’s case, Juvara claims, Shakespeare’s wife Anne Hathaway was the bard’s translator extraordinaire.

During his research, Juvara sent identical letters to Queen Elizabeth II and former British Prime Minister Tony Blair, requesting special access to Shakespeare’s personal library, which he charged had been “hidden” for “nationalistic reasons.” “For the sake of historical truth,” he implored, “[…] we must have the courage and wisdom to open [it].” Neither wrote back.