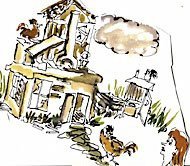 The coat-of-arms was the only aristocratic feature of this shabby little house surrounded by rabbit hutches and chicken coops. Drawing by Suzanne Dunaway.
A

fter years of living in a rental apartment, I grew convinced that the best way to consolidate my life-long romance with Italy was to own a house. But the high costs of property in Rome, Tuscany, and Venice put the idea discouragingly beyond my means. Through my work, I’d become acquainted with Tuscia, a ragged, rustic corner of undiscovered Italy nestled not far from Rome between Tuscany and Umbria. It was mostly unknown to tourists and investors.

Here was an unspoiled countryside set amid rounded mountains covered with chestnut trees. Lower down on the slopes were olive groves, pastureland, and tidy vineyards. An endless array of medieval hill towns dotted the horizon: San Martino al Cimino, Soriano, Vitorchiano, Calcata, Bolsena, Marta. The area was blessed with pristine lakes, hot springs, an abundance of Etruscan ruins, baroque villas and sculpture gardens to explore. And, most amazingly, as I learned while sipping cappuccino and perusing newspapers in a Rome cafe, houses there were still unbelievably cheap.

Like any serious house-hunter, I had focused on my essential needs: a bedroom-studio for myself, a kitchen with fireplace, a small bathroom, and guest room. A borgo — a cluster of old houses often near or in the country — sounded perfect. There’d be neighbors, and probably shops nearby. I phoned and was given an appointment for the next day.

Noble farmhouse… Those words conjured up a stately building with high-ceilinged rooms, tall, arched windows overlooking cypress trees. The fact that it was habitable was ideal. Repairs could be done slowly when time and money were available. And a wood oven! I imagined myself pulling loaves from the fire.

The owner, a Rome architect, accompanied me to see the place. She told me the house had been occupied for years by an elderly aunt, now in a nursing home. She also explained that she had drawn up some plans for remodeling it, which the buyer was under no obligation to purchase along with the property.

“You did say that it is ready to live in?” I asked.

“Oh yes, except for a couple of minor details,” came the reply.

We turned off onto a side road, lined with giant cypress trees, leading across parched fields. We passed several dreary houses and came to a halt outside a grey stone building with a narrow flight of stairs that led up to a porch. Above the porch hung a coat-of-arms. It represented the noble Farnese family, once powerful landowners in the area.

But the coat-of-arms was the only aristocratic feature of this shabby little house surrounded by rabbit hutches and chicken coops.There was no vegetation in the vicinity, save an enormous oak tree beside the house, which was completely covered in scaffolding — presumably to keep the tree from crushing the roof if it fell.

“Wait till you have seen the inside.”

We entered through an arched door to a big, dark, and dank room on the ground floor. In the broad beam of the architect’s flashlight, I saw it was festooned with spider webs suspended from the ceiling beams, which emitted the whirring sound of voracious wood worms.

“This is the kitchen.”

There was a wood oven and wood stove, a long plank table, and a row of dusty, empty demijohns along one wall. A few bottles of tomato sauce were lined upon a shelf. It looked more like a cellar than a kitchen. There were no windows, and no stairs connecting it to the upper floors.

“The oven is original,” she said proudly, pointing out the date 1785 chiseled in the blackened wall over the oven door. “And over here is another original feature hard to find these days.”

She turned the beam of her torch on a trough carved along one wall.

“That’s where they soaked the laundry in ashes.”

To reach the upper floors, we had to go back outside and up the stairs. The door opened onto a tiny room, where a bed was crammed along one wall near a fireplace. A kerosene lantern hung from a nail, confirming my suspicion that the house was not wired for electricity. A rickety, ancient-looking ladder led up about eight feet to the next floor.

“The other bedroom is upstairs,” she said, pointing up the stairs. There was no use risking my life on that ladder. This was a house I wasn’t going to buy, no matter how cheap it was, and besides I would have needed a parachute to get back down again. Her auntie must have been a very nimble old lady.

“I’m sorry, but it’s not right for me. But please — “ I said, suddenly looking around me, aware that something was missing, “Where’s the bathroom — I’d like to use it, if I may.”

The architect gave me a quirky smile.

“Well, actually, there isn’t one.”

My puzzled expression prompted her to continue. “The addition of a bathroom is included in our plans,” she said. “The pipes are all there, it’s just the hook up to the city water and sewer lines that is missing.”

“Your aunt lived here without a bathroom?”

“My aunt is an old fashioned woman. She used a chamber pot.”

And as she pointed towards the bed, I now noticed that object discreetly tucked beneath the bed.

— The author is a novelist, teacher and critic.