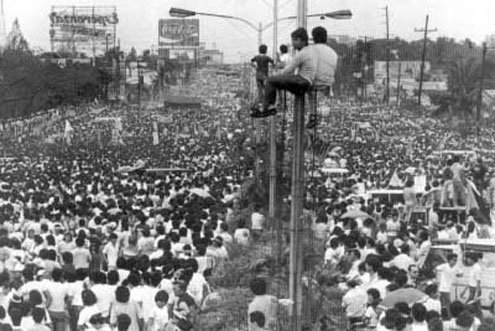 ollectively rising up against authority is a thrilling act that once set in motion thrives on adolescent resoluteness that increases in proportion to the forces arrayed against it. It generates self-esteem, nobility and a gradual addiction to a loose set of goals that are often fractured and ephemeral as the uprising ebbs and flows.

Egypt’s public surge, like Tunisia’s before it, carves most of its purpose from its own existence and literal mass, much like the “People Power” citizens of the Philippines who in the mid-1980s rose up against tyrannical President Ferdinand Marcos and his Marie Antoinette wife Imelda, eventually smothering Marcos into fleeing (though the democracy that followed proved flawed).

Though many outsiders are eager to frame the Egyptian insurrection with a grand leitmotif, assigning democratic cravings to the poor and disenfranchised, Cairo’s street legions in fact represent a tear-down movement whose cumulative momentum has been slowed at least in part by the failure of oppressors to behave as many assumed they would, namely by ruthlessly gunning down opponents.

By in large, uniformed Egyptians have systematically refused to slaughter disenchanted Egyptians, depriving the movement of the revolutionary ingredients necessary to definitively assign white hats and black.

What began as an incendiary protest against government rule and evolved into a demand that President Hosni Mubarak resign has lapsed into a parry-and-thrust battle in the vein of competing soccer hooligans, as if one Egypt were playing another in a particularly physical match.

The result is cathartic, inspiring, impetuous, and morosely entertaining, but largely devoid of any context aside from that imposed hourly and daily by viewers who launder the chaotic fight with partisan and passion play meaning. There has been no contested election; no imprisoning of a popular opposition leader; no one identifiable corruption worse than all others.

Calls for Mubarak’s ouster — which for the crowd would represent the game-winning goal — is adamantly resisted by a military that has no wish to concede such a goal, lest it suggest to future crowds that they need only take to the streets to effectively challenge authority, far too a bitter a pill for longtime military bureaucrats to swallow.

In the marketplace Middle East, where maintaining face is vital, restive masses are a recipe for disorderliness and national disability. So much so that other Arab governments have attempted to pre-empt street protests by announcing government resignations or pledges of reforms.

The desire to restore public order is all the more necessary since uprisings were invested by voyeuristic media participation and nourished by 24-hour live feeds that peddle the latest morsels of would-be insight.

But a country stripped of its privacy, as Egypt is now, can also seem weak and undignified, a point Mubarak harped on in speeches and comments that have struck an underlying nerve among those Egyptians who are not in the streets, sense peril in mob lurches, and worry palpably about the risks of a post-Mubarak power vacuum. Onlookers, not demonstrators, still constitute the majority of the country’s population, a fact not lost on a military has largely worked to avoid the potential devastation that widespread confrontation would most certainly cause.

So it is that Cairo’s angry lots, while impressive to global TV audiences, still struggle for a political identity separate from relentlessness alone. It’s not easy. The protestors have no identifiable leader, putative or incipient. No party or movement has actively entered the fray. While Mubarak’s resignation and constitutional reform are said to be nonnegotiable, there is in reality no “pro-democracy” charter of the kind implicitly suggested by media outlets that use its imagined existence to lend additional weight to dramatic context — The New York Times, for example, has already spoken of a “sea change in the region’s political landscape.”

Yet the crowds themselves are considerably less sophisticated. They embody the insubordination and resentment that unemployment can bring to bear even in freer states. Smitten by Tunisia’s January surge, which produced a presidential ouster, they competitively seek at least the same outcome. In that regard, uprising is a temporary vocation quenched by change alone.

But Mubarak’s exit is hardly a roadmap. He is 82, not 50. Nor is his retirement an assurance that the next step in Egyptian life will bring about the adoption of some primitive version of Euro-American civics. Today’s mobs can be tomorrow’s conservatives. Patriotism can follow regicide. “Sea change” rarely occurs in streets alone.

The character of post-authoritarianism has time and again proved volatile. Pakistan alternates between lucid presidents and puffy generals. When Boris Yeltsin’s egalitarian promises faltered in 1990s Russia, greed and near-chaos followed. Lebanon still lurches between civilian and religious factions. Europe-minded Turkey has yet to fully back away from its harder Ataturk legacy. Israel, included by proxy in the Western fold, remains a tank state with love for domestic dissent.

Saddam Hussein in his heyday was little more than a rude and crude Mubarak, a fanatical and arrogant secularist who enjoyed skating on thin ice (which in turn suggests Iraq might not have needed American “help” to engineer its own domestic stirrings. But no one will ever write that book.)

Cairo’s hectoring mobs reflect the loudness of an age. Disapproval as static hiss is longer sufficient. As in the United States, where political debate has turned brutal, immediacy has its own clout, whether on the streets or online. Egypt is coming late to slogans, as in: “Just do it.”