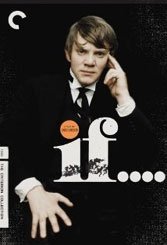 “If” was made at a time when anything could happen. Paris was besieged by student-worker revolt. Millions of students were staging global protests against the Vietnam War. Arab terrorists had hijacked commercial jets and blown them up in the desert. The Rolling Stones tended the devil a sympathetic hand. Out of this bluster and attrition, Lindsay Anderson spun a fable whose core was the repressive nature of the British boy’s school system, a pot boiling under a too-tight lid. Seen now, it’s a period piece. Seen then, it was devastating with lunatic portent.

Mick (Malcolm McDowell), Johnny (David Wood) and Wallace (Richard Warwick) are teenaged students at College House, a British boarding academy intended to produce well-groomed, assembly-line boys. But one look at McDowell’s Mick and it’s clear that the electrocardiogram is broken. The “If” of the title begs the question of what happens if students ignore the namby-pamby of conventional protest and stitch together their own bazooka militia. Exaggeration and satire are essential to this game, so are handfuls of unexploded sexuality, homo and hetero, but Anderson’s sense of the comic is anarchic.

The militarism of school rules is mimed by the students who use its authoritarian spirit to engineer a kind of savage insider prison break. When Mick says “War is the last possible creative act…” and “One man can change the world with a bullet in the right place….” he’s merely ad-libbing the propaganda of agitated times. But when the allegory whoops into rage, rip-roaring and armed, it’s Mick darker side that laughs last: “The whole world will end very soon — black, brittle bodies peeling into ash… “

Credit Anderson with discovering McDowell’s menace, which Stanley Kubrick would soon put to even more sinister use in “A Clockwork Orange.”