If Umbria could swim 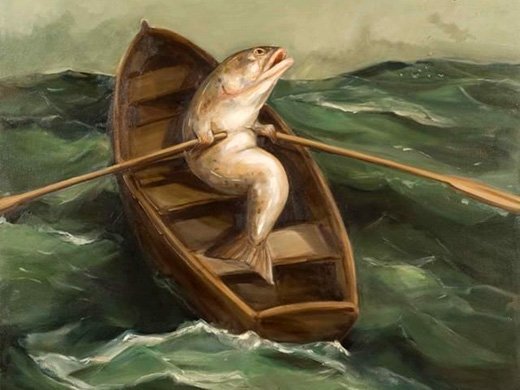 Those seeking top-notch seafood in landlocked Umbria are rowing against the tide.
F

ish in Umbria has always been scarce. An inland province has no watery pastures. As a result, most Umbrians are not well acquainted with the aquatic world as a source of our food. Unless your idea of the aquatic comes in the form of the duck or the goose. We like them a lot.

But it’s not the same as asking us about pork — in which we’ll gladly tell you what’s good, what’s not, and send in schools of perfect recipes. In part, our opinions are backed by 2000 years of tradition. Did you know, for example, that the ancient Romans were fond of prosciutto? Butchers from Norcia, a town in the Umbrian mountains, were famous for their craft. Called “norcini,” these skilled pig butchers made regular visits to Rome to castrate or slaughter the pigs. They’d cure the meat and transform it into all sorts of delicacies Rome’s upper echelons feasted on.

Have you ever heard of Umbrian fish? I doubt it. We’re in the mountains here, miles from the Mediterranean Sea. If you’re a discerning eater familiar with regional ins and outs, you can probably find trout from the emerald waters of the Nera River. Or a mixture of native and imported freshwater fish from our lovely, but not very productive lake, the Trasimeno.

Fish confuse Umbrians. Some people are convinced an eel is a snake. To no avail I say an eel is a fish and lacks a tongue. They say the eel-shaped torciglione pastry has a tongue and that’s that.

But aside from river catches, you’ll mostly find disappointing, frozen seafood, most of it badly prepared. A glaring contrast to our celebrated local cuisine.

The scarcity of fish is probably the cause of Umbria’s most intriguing and unique pastry, the torciglione. Made from almonds and sugar and rounded to look like a fish or a snake, the torciglione’s history is shrouded in legend.

One tale contends a nun made the pastry in the shape of an eel to honor a visiting coastal priest, since no fish was available in the monastery. Other stories date to before Christianity, when a similar sweet was made for winter solstice and offered to appease the gods.

In my hometown of Perugia, we call it serpente, which means snake.

Fish confuse us. Consider the nun legend. I know quite a few people convinced an eel is a snake. To no avail I have long explained that an eel is a fish and lacks a tongue. Locals shoot back by noting that a torciglione almost always has a tongue (made of almond or candied fruit). That proves it’s a snake, right?

I think its shape as that of an ouroboros, the ancient circular emblem of infinity and renewal, a most fitting symbol for the winter solstice or for Christmas and New Year.

No matter how it’s come to us, the torciglione is both beautiful to look at and delicious. It’s also very easy to make so long as you’re patient and let the pastry dough rest a long time to set and dry before baking.

An eel may fish or reptile, but it tastes sweet.

— Transfer the mixture on a long piece of cling film over work surface. Shape it as a roll, wrap it in cling film and continue rolling until it’s about 60 cm (24 inch) long and 4 cm (1 and 1/2) thick. Remove the cling film and transfer the roll on a baking sheet lined with parchment paper. Shape as a coil.

— Now, form the head so as to give it a triangular shape and place the red cherries on the sides to form the eyes and tongue as in the photo. Using kitchen scissors, make small slits in the body of the snake at 1 and a half-inch interval to decorate with whole almonds, representing the scales. Pinch the end side of the snake to make a tail.

— Cover loosely with cling film and refrigerate for 1/2 day to set.

— Bake in preheated oven at 170 C for about 35 minutes or until lightly golden. Don’t overcook or it will be too tough!

The torciglione can be stored for up to two weeks at room temperature.