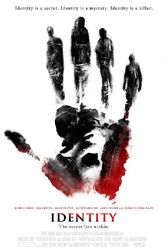 A tricky and top notch post-Hitchcock thriller that befriends claustrophobia and won’t quit. Ten strangers are trapped in a Nevada desert motel during a rain storm. One by one, they’re killed off. Sounds like a horror cliché, which in part it is, except that director James Mangold has tricks up his sleeve — and they’re very, very good. It’s an old conceit — who’s the real bad guy? — but the writing is tight and lean. Just enough is left unsaid. John Cusack and Ray Liotta are naturals for this kind of “stares matter” yin-yang movie. Only veteran plot-busters will pick up early on the kicker, which comes as welcome jolt. No throw-away sentimentality here.