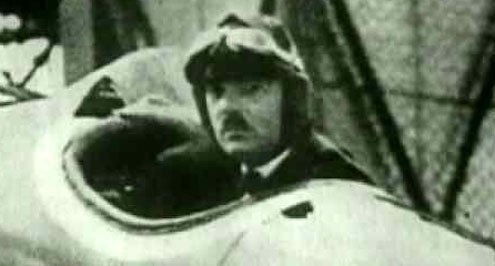 ince I first read about him, I have always been intrigued by the little-known Italian poet Lauro De Bosis. Born in Rome in 1901, he vanished while flying solo over the Mediterranean at the age of 29. Apart from a Rome piazza bearing his name — which, ironically or not, houses an obelisk with the vertical inscription MUSSOLINI DUX down one side — De Bosis is lost to history.

I first came across his name in “The Oxford Book of Italian Poetry,” which I found while scavenging the shelves of the Gotham Book Mart for anything in Italian. He edited the volume before his death.

Though the book was a goldmine, it was his personal story that caught my attention. He was the son of Adolfo De Bosis, an esteemed poet and translator of Whitman, Shelley and Homer, and Lillian Vernon, a New Englander and daughter of a Methodist minister who grew up in Italy. Since I’m the son of Roman and a New Englander, the story was irresistible.

In the years before Mussolini rose to power, De Bosis’s Rome home was a kind of intellectual salon. Like many thinker of his day, De Bosis had flirted briefly with fascism in its early phase, though he grew quickly disillusioned with Mussolini after the murder of the anti-fascist politician Giacomo Matteotti.

His verse drama “Icaro”, written in 1927, was an anti-fascist allegory disguised as a retelling of the Greek myth of Icarus. The poem culminates, as does the legend and De Bosis’ own life, with the hero’s glorious flight and subsequent fall into oblivion.

I kept the New York Public Library’s copy of “Icaro” on loan for months. De Bosis’s companion, the American actress Ruth Draper, had translated it in the early 1930s. By then, my curiosity was obsessive. Had De Bosis really prefigured his own end? The symmetry between his only completed poetic work and his actual death was an eerie footnote to his legend. Or rather, it was his legend. I finally bought my own copy of “Icaro” from an online bookshop.

De Bosis shuttled back and forth between Italy and the United States, where he taught Italian literature at Harvard. While abroad, many of his friends and family were arrested by the regime, including his mother. He crime? She had assisted her son’s dissident political activities by operating his mimeograph machine in his absence.

According to historian Gaetano Salvemini, when the arresting officer courteously asked her, “Why did you do it?”, she fell back on Mussolini’s recent reference to the Italians as “40 million docile Italian sheep” who gave wool to the government. “Because I am not a sheep,” she replied.

De Bosis then devised a plan. He purchased a small plane, filled it with hundreds of thousands of pamphlets denouncing the atrocities of Mussolini’s regime, and dropped them over Rome at the crowded dinner hour.

The pamphlets’ were dated “Rome, year VIII since the murder of Matteotti.” The mockery of the regime was obvious: It’s own dating system had started 1922, a perverse satire of the Christian Anno Domini. The De Bosis pamphlet contained a 10-point message to the Italian people on the need for resistance, accompanied by a letter to King Victor Emmanuel II. It was signed “The Director.” Among the points:

The final point was the essential one, and it runs through his poetry and letters: “Have faith in Italy and in Liberty. The defeatism of the Italians is the real basis of the fascist regime. We are in full Risorgimento. Don’t despair.”

After De Bosis completed his run, he and his plane vanished.

When I left the United States for Italy I was busy working on my own translation of “Icaro.” I was even in touch with author and translator Arturo Vivante, De Bosis’s nephew. Nearing his eighties, he lived in Wellfleet, Massachusetts and ran a small press called Delphinium. I sent him a few verses of “Icaro.” He responded in tiny, almost illegible script: “Lauro, who cared a great deal for his play, would have been very pleased.” Vivante died in 2008.

I had planned to continue working on “Icaro” once in Rome. Maybe I was put off by De Bosis’s seeming anonymity among his countrymen, or maybe I was just too busy perfecting the language and letting the city flow through me to be bothered, but the incomplete translation is now in the dusty bottom drawer in my writing desk. I pick it up from time to time. It is written mostly in pencil on broad-lined yellow stationary and makes me marvel at the ambition of a younger self.

After years of chasing down De Bosis’s shadow, his other surviving nephew, the engineer and author Roberto Vacca eventually contacted me. He’d found me through a piece I’d written for this magazine on the Roman poet G.G. Belli. Generous and encouraging, he has often regaled me with anecdotes about the lively De Bosis household.

But I don’t despair over my half-finished work. A day will come when I’ll feel up to the task of finishing up “Icaro,” and give this literary curio a second life. Circumstances could not be more favorable.