I Was an Elephant Salesman 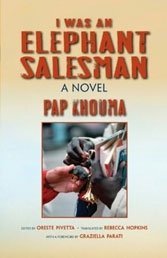 By Pap Khouma, translated from the Italian by Rebecca Hopkins

here’s an endearingly gentle edge to Khouma’s fictionalized memoir of his time as an immigrant vendor in Italy of the late 1980s. That’s because Khouma’s early selling days (he first arrived in 1984) predated the anti-immigrant rage that that central and southern Europe has since made into something of a political industry.

The Muslim-animist son of a “family of medicine men,” Khouma’s Senegalese vendor heeds a fortuneteller’s augury and heads first for the Ivory Coast, then back to Dakar, before pushing northward, hoping to reach West Germany. But when Germany doesn’t pan out and France turns inhospitable (even the Foreign Legion won’t take him), he falls back on the cities and towns of Italy’s Adriatic Coast, where he peddles African hardware — “elephants, eagles, necklaces, bracelets, whips, and belts…” — to tourists and curious Italians, all the while living in squalor and dodging both police and deportation orders.

The strength of Khouma’s narrative is its noble optimism. He’s often rousted but rarely demoralized. “I want to sell because selling is our job. I don’t like charity.” Though his is a bittersweet life lived in cars and dives, the 1980s evince none of the 21st century’s relentless menace. Police can be cruel but also compassionate. As Khouma and his salesmen friends troop from Riccione to Ravenna, Senigallia to Cesena, Milan to Genoa, camaraderie and dignity are their mantras.

Finally tiring of Italy, where his merchandise is often confiscated before he can sell it, he returns hopefully to Senegal, to fruitless avail: “Destiny and this destitute and stagnant country drive me back to Italy.” But the “long and painful via crucis” continues — even after the Bettino Craxi government passes an amnesty law granting illegal aliens residency permits.

A novel this is not, but it serves the vividly worthy purpose of putting an immigrant’s odyssey on the map. He makes a point to dismantle media rumors (now commonplace) that African immigrants are the agents of criminal gangs whose only goal is to deal drugs and steal. He even criticizes a newer generation of immigrant vendors who “don’t like to get up early, don’t like to take the car around to hunt for a better deal, and can’t stand going around selling with heavy bags on their shoulders.”

Khouma now lives in Milan and publishes an online journal of migrant writings. His book was first released in Italy in 2006 as “Io, venditore di elefanti.”