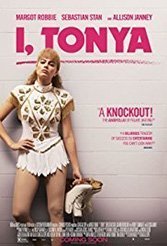 The portrayal of working-class life in “I, Tonya” approaches “slumming it”— so intense, violent, and emotionally fraught are the trials and tribulations of the subject of this engrossing docu-drama: one-time Olympic figure skater Tonya Harding.

Harding is the skating wonder who was the first American woman to complete a triple axel in competition and whose sturdy athleticism, dress and demeanor defied the then-norms of lithe figure skaters gracefully circling to classical music. Although she clawed her way to the Winter Olympics twice in the early 1990s, Harding is best remembered for her possible involvement in the kneecapping of fellow skater and rival Nancy Kerrigan at the 1994 Games.

Margot Robbie is compelling as the salty, chippy, driven Harding. She plays the skater both at the time of the Olympics and in a decades-later kitchen interview, scenes creatively shot and crosscut. Harding’s ex-husband Jeff Gillooly, who may have ordered the kneecapping that ended Harding’s, rather than Kerrigan’s career, comes across as a nice guy, even though, according to Harding’s story, he beat her. She’s implicated in violence too; in one scene, she shoots a gun at Gillooly, this time according to his story.

Allison Janney, in an over-the-top performance filled with humor and menace, plays Harding’s chain-smoking, cursing, abusive single parent. She would be the principal villain of the piece, except that place is reserved for the Olympic judges. Those two — the mother and the judges — represent the lows and highs of social class, each trying to mold a resistant Harding to an image not her own.

The film challenges the notion that truth can be found. A disclaimer fills the screen, asserting that the film is “based on irony-free, wildly contradictory, totally true interviews with Tonya Harding and Jeff Gillooly.” Fact-seekers will rush to their Google searches after the credits, but in vain. It’s just not clear who ordered what to be done to whom, who knew, nor whether Harding should have been banned from skating for life.

If “I, Tonya” reveals no truth, it succeeds in elevating Harding to the status of a victim, and perhaps more. Once known primarily as the perpetrator of a heinous assault, here she’s something close to a self-assured heroine, struggling to be heard, recognized, and appreciated by a skating elite that belongs to another world.