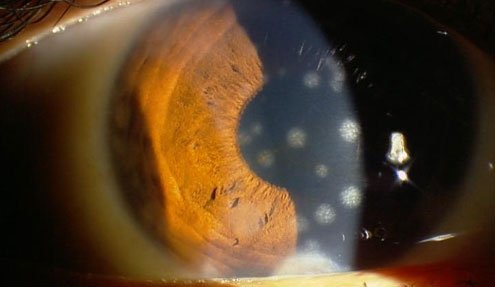 What does mascara have in common with ocular herpes.
I

came down with a terrible eye infection in August. For those who don’t already know it, there’s nothing worse than getting sick in August… in Italy.

Part of the reason is that country closes up shop and goes on vacation. Even doctors.

What you’re left with is bad service. Those stuck in Rome are angry that they aren’t also on vacation. They spend a lot of time feeling sorry for themselves.

My eye infection proved the point. I’ve always had 20/20 vision and never had reason to visit an optometrist. So when my eye started to hurt, I felt like an orphan. All the doctors my friends referred to me were already well into their happy trails ferie, leaving me no choice but a trip to the emergency room at the eye hospital in Rome.

It could be worse, I thought. I’d heard wonders about the place. At the time, I had no idea that I had an eye infection. It just felt like something had drifted into my eye causing pain and constant tearing.

I walked into the emergency room, took a number, and patiently waited my turn. As I scanned the room, I began observing the “victims” around me. It was eye patch city. When my number was finally called I trooped into a back room.

There, waiting to observe me, were two chatty Italian women, a doctor and her assistant, who were busy discussing their upcoming vacations.

“My eye burns and has been tearing non-stop for the past two days,” I told them. “It feels like something got in my eye.”

Uh huh. They picked up on my accent. By then, my chin was strapped into an eye-exam device.

I wasn’t sure exactly what my accent had to do with my eye but I replied politely. Miami, I told her.

Um, can we get back to my eye? But no, they insisted we talk about Miami instead, and how both of them desperately they wanted to go there.

After they finished their Miami fit, the doctor gave me her diagnosis. With a straight face, she said: “You need to be more careful when you put on your makeup.”

“That’s right, you have two cuts in your eye mostly likely caused by you putting on your mascara incorrectly.” For emphasis, she imitated someone poking a mascara brush into their eye, missing their eyelashes completely.

To me, the woman was crazy. I had been wearing mascara for years and never poked my eye out.

Still, I followed her advice, took the drops she gave me, and I walked out with an eye patch just like my fellow comrades.

For the next five days, as I performed my daily errands, I felt everyone’s stares. It was the eye patch. How dare I go out in public looking like that! Che figura.

Indeed, my patch was hardly making any fashion statements. I definitely looked like a pirate. Sadly, in eight years of living in Italy, I can count on my fingers the number of people with serious injuries or disabilities I’ve seen in public. Disability is unfashionable. It’s sad.

Meanwhile, my “mascara” eye was still killing me. By the time I made it to Calabria for my own vacation I could barely see.

It was back to the doctor, and this one (thankfully) gave me entirely different story. I had keratitis, or ocular herpes. It would take a month to heal, I would later learn, and only with drugs (and lots of patience).

I thought back to the doctor in Rome imitating the mascara brush while dreaming of Miami. August, I sighed.