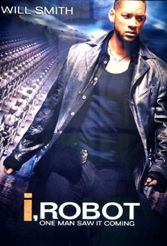 Major disappointment from Alex Proyas, whose vigorously suggestive work with “The Crow” and “Dark City” showed prodigious promise. Not here. In 2035, a Chicago cop (Will Smith as Spooner) investigates a murder that may have been set in motion by a robot. Isaac Asimov’s 1940 take on AI — evil corporations hijacking humanity — was immensely provocative in its time (the idea was Isaac Asimov’s), but in Proyas’ hands seems tired of itself (he may need to take a sabbatical from sci-fi).

The movie’s problems begin with Smith, who hogs the camera. Proyas defers to him continually, putting the sci-fi visuals (the robots, mostly) into the background and neglecting pace in favor of his star’s patented smart-ass remarks. The cliché-ridden script reads like a bad “Law and Order” episode made for preteens.