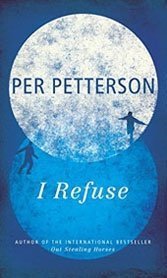 By Per Petterson, translated from the Norwegian by Don Bartlett

Middle-aged Tommy sees adolescent-era friend Jim fishing from a bridge near Oslo. It’s been almost half-a-century since the two were bosom buddies in the town of Mørk. Tommy, son of a deeply abusive father, is now a successful if unfulfilled stocks trader earning “a meaningless large sum of money.” Jim is a semi-destitute recluse, once a librarian (like Petterson), who’s spent most of his life “at half-mast,” fighting low self-esteem and ideations of suicide.

Petterson’s sincere but often tedious novel is born from this chance encounter and almost immediately transforms itself into sequential flashbacks intended to revive the details of the long-lost friendship between complicated men. Stubborn, headstrong, troubled — as estranged from themselves as each other — Tommy and Jim have spent a lifetime trying to mine purpose from life, with limited success. Ties that bind are elusive while shattering a constant. Their near-mystical reunion gives Petterson means to revive the parochial landscape of rural Norway of the late 1960s and early 1970s and to family history.

The novel’s focus is on fortitude and the unwillingness to capitulate (“I refuse…”), mercurial Tommy (“… a stylish, dark mysterious boy”) to a garbage man father who beats his four children (their mother fled); Jim to a deeply Christian mother who would see him tow the line, until he falls into the clutches of paranoia, panic attacks, and a life of serial medication. While Tommy’s sister Siri, his custodian and his vanished mother all get a narrative turn, the two men are the sentimental lodestones in a Haruki Murakami-styled pop past that includes references to Bob Dylan, Led Zeppelin (“Good Times, Bad Times”) and The Beatles.

Petterson’s previous novels have used rural life and family vicissitudes to give meaning to memory, often with subtle grace and power (“Out Stealing Horses” foremost among them). There’s similar construction here but the mood is too often dirge-like, the incomplete “now” (2006) eclipsed by a richer, more fully fleshed out “then” (the 1960s and early 70s). Adults surrender substance and form to their more keenly covered teen incarnations. Petterson’s sighing leaks in, a kind of palpable autobiographical languor, not necessarily a good thing for a novel that is ultimately summed up by Tommy in three pithy sentences: “I used to me young. I wasn’t young any more. I wouldn’t be young again.”