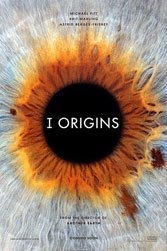 To work, good speculative fantasy requires just the right mix of real and altered states. Too much juicing early on spoils the broth. That’s the fate of Mike Cahill’s movie, undone by a heavyweight theme — science and data harvesting (through retinal scans) vs. the science-faith riddle — advanced with an unnecessarily heavy hand. Ian (Michael Pitt) is an earnest young New York City molecular biologist eager to determine if he can make mice sensitive to color, using the eye to revise basic genetic assumptions on what species can and can’t acquire — research that obviously pays no heed to intelligent design.

Enter mumbling mystery model Sophi (Àstrid Bergès-Frisbey), an Argentine-French spirit world believer who Ian meets at a Halloween party and falls for in the most unscientific of ways. Ian photographs Sophie’s stunning eyes — it’s his science-driven hobby — and suddenly they’re improbable lovers. Waif-like Sophie swears by the magical power of white peacocks, the living essence of stone-sculpture eyes, and demands to know why Ian works so hard “to disprove God.” Dismissive Ian counters with “my atoms have always loved your atoms,” and the odd couple flourishes, albeit ominously.

Until tragedy strikes, pushing Cahill into his part two and Ian’s second romantic connection, this time with his lab assistant Karen (Brit Marling). This union flourishes well into the future, when the birth of their son circles back to Sophi and predictably evokes intimations of re- or pre-incarnation. Cahill creates a suggestive if awkward premise that plows headlong into the fraught rapport between those pledged to science and digital data and those captivated by the time-transcending ramifications of faith. But Cahill’s clunky meanderings (from New York to India) put suggestiveness ahead of storyline, sapping the whole of needed awe and eventually squandering any potential for the kind of revelatory ending Cahill clearly seeks only to overplay his hand.