I love you, man 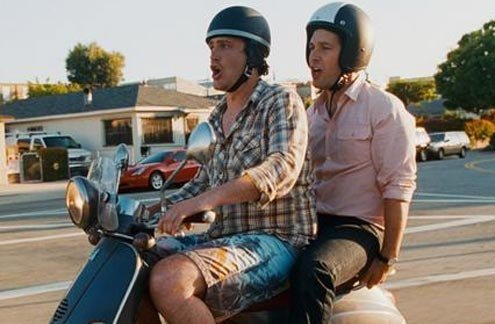 Men together can be a tight squeeze, but the bonds matter.
I

just finished reading John Steinbeck’s “Of Mice and Men,” the tragic, Depression Era tale of two men who have bonded to fulfill reciprocal needs. Throughout the short novel everyone keeps asking Lenny and George why they met up and travel around together.

Lenny, who has the strength of a bull but the mind of a child, is probably incapable of surviving on his own. It’s not clear, in the arrangement, what’s in it for George, who is clever and ambitious and would probably have made out better on his own. Yet for some unexplained reason he willingly sacrifices himself just to protect Lenny.

Friendship — as in, “I like him and we do things together” — does not nearly begin to describe the depth of a male bonding relationship. Whether it’s tagged, “best buds,” “like brothers” or “bromance,” most men at one time or another may experience a strong emotional relationship with another male.

Police on the beat or in a working partnership recognize the importance of this bonding. They know their lives can depend on their mutual ability to understand each other at a deep mental and emotional level.

I’ve heard police describe this relationship as intense as any marriage, and separation as devastating as any divorce. Such a bond is also frequent among fire fighters, soldiers, hunters, explorers, athletes, workmates, schoolmates, and sometimes even business partners.

The other day I was sitting on my balcony watching two workmen on the opposite balcony doing some reconstruction. One man was setting up a small scaffold. As he placed poles and ties in position, the other man, anticipating his needs, handed him the electric drill or helped him twist a pole into place. Very few words or directions were exchanged, yet the work progressed as if each knew what the other was thinking. This is evidence two minds are linked.

Homo sapiens are social animals and linkage is written into our DNA. Our “big” brain may have only developed as an adjunct of social strategy. Social bonding ensured our ability to out-compete all other species. Imagine our early ancestors on the plains of Africa. Typically, females remained in groups closer to camp, while males went out on long-distance hunts. Alone in the wilds, the survival chance for a small, weak and slow animal species lacking any notable natural defenses (large fangs or claws) was poor. But as a hunting couple, able to communicate and to think together, our frail little ancestors proved formidable.

Should one male be in peril, the other would risk his own life to save him. Moreover, should one man die, the other would return to camp and often assume the responsibility for care for his offspring. Socio-biologists refer to this as the altruistic gene. If we consider that both same sex and opposite sex bonding creates the link between individuals — underpinning social groupings and society — then male bonding, whether heterosexual or homosexual, is an essential quality that allows for the survival of the species.

Female bonding is just as prevalent, although it may differ in configuration. Generally speaking women readily embrace a bonding relationship, whereas men often fear and are ashamed of it. Male bonding is so common that we see it all around us but, like many topics that involve men and emotions, it is either completely ignored or regarded with suspicion.

This is of course highly culturally specific. In southern Italy, male-to-male bonding is out in the open for all to see. Men don’t appear shy about their affections towards other men.

Our southern Italian male friends commonly refer to us — either my partner Alberto or I — as bello, beautiful, or send messages asking if we miss them, signed, baci, kisses. They are expressing, ti volio bene, I care for you, not, ti amo, I love you in a romantic or sexual way. As one southern Italian friend observed, “the only time an Anglo-Saxon man can tell another man he loves him is when they are both stinking drunk.”

But make no mistake, even though Mediterranean men may be culturally and linguistically more at ease in expressing their affection toward other men, homosexual relations, in no small part due to religion, remain suppressed and hidden.

As for sex, we all know that love and sex do not always drink from the same fount.

It goes without saying that homosexual and heterosexual men have different orientations. But when it comes their emotional capacity to love another man I am left to ask myself why so many heterosexual men fear and deny this fundamental aspect of their humanity.

At the tragic end of “Of Mice And Men,” George explains to Lenny that, “Guys like us … ain’t got nobody in the worl’ that gives a hoot in hell about ’em -“

“An’ I got you,” replies Lennie. “We got each other, that’s what, that gives a hoot in hell about us.”