I had a dream 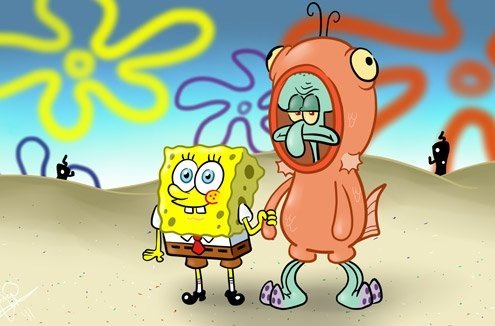 Spongebob to the rescue — at least when it comes to learning "moron," "lunatic" and "idiotic."
I

had a dream — or a delusion of grandeur, or maybe just a totally unrealistic goal, for our American summer.

But now, as we pack our bags — which (in case you were wondering) can’t exceed 50 pounds or 22 kilos kilograms — and head back to Italy, I hang my head low in shame.

So it’s time to come clean for what I didn’t accomplish. Because I’m a lapsed Catholic who still believes confession is good for my rotting soul.

So call this “What I didn’t do on summer vacation.”

Finish first grade workbooks in both Italian and English for first-born child.

Could probably still get money on eBay for them.

Teach four-year-old how to read.

He spent a lot of time reading the lettering on boxes of cinnamon toast crunch, honey nut cheerios, and Lucky Charms, but his phonics skills still need tweaking.

Take better care of myself (i.e. skincare and exercise)

Started off good. Bought a hat and sunscreen.

Lost my hat on the boat. Discovered sunscreen makes me look like an acne-riddled teenager who is also suffering from premature aging. (I’m now one step closer to malignant melanoma and the same color as my Rebecca Minkoff wallet.)

I also bought new running clothes and shoes, which I used twice to run and six times to make people think I had run. (It worked.)

Success. Went to Florida twice. But since I didn’t need drug rehab, cardio rehab, or a concealed weapon license, I could’ve skipped it. The upside to the Red State/Sunshine State is that they have really cheap emergency care. The downside is… we needed emergency care after a venomous catfish swimming in E. coli waters managed to impale my four-year-old. It’s not a real vacation until somebody suggests intravenous antibiotics, right?

Avoid any other emergency care.

Three stitches on the bridge of offspring numero uno‘s nose, which then impeded goal no. 6.

Spend time with lots of friends.

While we did get to see several friends, the time was brief and splattered with random interruptions by small people demanding liquids, snacks or starting questions that began, “Mommy can you buy me….”

But I was happy to see that it wasn’t just my children who undid parental play-dates. All my friends with children were in the same boat: if it wasn’t summer camp or football practice, it was rowing or a birthday party. Kids in every age group had parents ping-ponging around. Free time was at a minimum.

Though I may not have achieved much this summer, my kids had a great time, bumped up their English vocab (thanks to Spongebob — for the additions of “moron,” “lunatic” and “idiotic”), improved their slang (thanks to their cousins: “Hey Mom check this out!”), and learned the joys of shopping at Target. They’re half-American after all.