I go to… America! 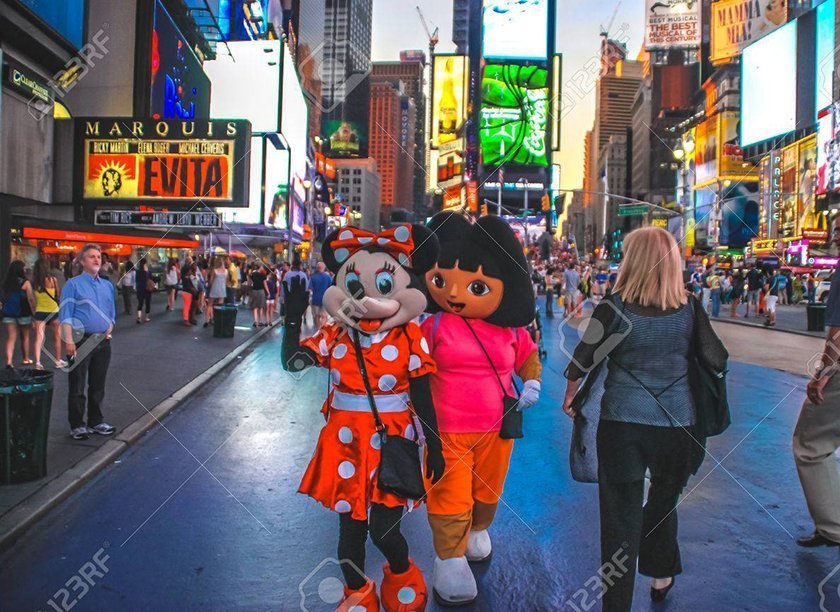 Ah, the ever-friendly natives of New York City!
I

t hit me recently that while travelers and bloggers who fall for Italy  can’t get enough of conveying their rapture, the same doesn’t hold true for the United States, which somehow doesn’t seem exotic enough for anyone to wax poetic.  The best they can come up with is that America is, well, big (Italy is also big, or tall, and very cramped, but no one writes about that).

I deplore inequality in any form, so I thought I’d balance the scale by telling you about my U.S.A., but in the same spirit of boundless zeal Americans apply to Italy, which is where I was born and now live.

After all, no one country should have a monopoly on uplifting adjectives.

After years of dreaming of it, I finally made it to the destination that has long been at the top of my list: the idyllic, romantic, charming United States of America. My family left the USA generations ago as immigrants to Italy, and hearing my grandma talk about her homeland when I was small made me yearn to visit the country where she’d grown up.

I even created a Facebook group for all the Smiths in the world, and the American contingent, immigrants who settled elsewhere (Poland, China, and Bolivia, just to name a few), is quite large.

First stop, New York City. Hours spent watching “Sex and the City” (one of many fine American cultural exports) had introduced me to this vibrant city, this romantic haven for lovers, where despite the many ethnicities and trends, everyone speaks one language: passion. America would seem to be made for lovers.

From the moment I landed at the airport (as well as on the drive to the hotel), passion was evident in the way everyone spoke to each other, at times shouting vehemently. So charming.

This is evident in the way people run to catch the subway in the morning, jostling each other in ways both chaotic and caring. It’s evident also in the way people dressed as cartoon characters pursue you for a photo and a tip in that place called Times Square. This is a warm culture, one in which the expression of intense emotions is encouraged. The earthy, passionate nature of New York stands out as something special. I’ll never forget the barking and braying of the vendors selling candied nuts, hot dogs, and pretzels along the meshwork of streets. So loud! So delightful! It touched me that in today’s modern world, such reflections of old ways of life still survived. Modernity may be knocking at the door of many countries in all over the world, but New York, with its horse-drawn carts and the street-food sellers, shows us that we don’t need to let the modern swallow us whole. All in all, New York is a place where folklore plays a large and colorful role in the way the locals lead their lives.

Next, I decided to go to a small town to get a feel of country life in this wondrous land. I hopped on a quaint little bus —America’s  old-school touches are  truly charming — and journeyed to an out-of-the-way spot called Southampton, located in a traditional enclave of towns that locals refer to as the Hamptons. Never heard of it? I’m not surprised. This is a well-kept American secret, populated only by those who’ve lived there all their lives. Its residents immediately make you feel like you’re one of them. All moves at a slightly slower pace. There are popular local dishes, including one known as eggs benedict, in which the eggs are placed on bread and a creamy sauce placed on top. One day I sat beside a pleasant elderly woman eating the local delicacy while seated on a bench.  To my mind, the American elderly, old ladies in particular, are endearing creatures, eager at a moment’s notice to share their decades of stored up wisdom. One day I secretly hope to have an apprenticeship of sorts, one that allows me to learn how to make eggs benedict in the way Americans have made them for centuries. In fact, everywhere you look in In Southampton, tradition rules. Just look the reddish pink pants of the residents, the abundance of pearls adorning the necks of women, the abundance of golden retrievers, many wearing bandanas. History is the word that most comes to mind.

Finally, I traveled to Chicago. In the middle of the country, this bustling place, known as “the windy city,” is a necessary place to go if you seeks to get a sense of the country’s rich diversity. I love scouting lesser-known destinations, and Chicago, a city by a vast lake, is a gem.

Americans are wonderful, their minds free of worldly troubles, aside from the simple concerns like where to get a hamburger for breakfast.

Most people who have already visited New York choose to move north to Boston or south to Miami, but why not go down the beaten path? I could go on and on about this marvelous city — how the lake adds a rustic touch, how much at one with nature the city seems. The food, of course, is superb. It was in Chicago that I got the best slice of New York pizza since I’d been too busy to try it in New York itself (also colorfully known as The Big Apple). It was hard to find a place that offered it, and local customers looked at me with curiosity when I, a foreigner, ordered it. You could tell they were impressed by my intimate knowledge of American local cuisine. I suppose the more obvious order might have been a hot dog, the epitome and building block of an American diet, but I wanted to delve deeper, to get to know this city through its food.

Normally I’d say there’s too much to see and too little time. But this time, simply by having visiting New York, Southampton, and Chicago (and also attending a local baseball match, a game played only with the hands), I can safely say I’ve seen and understood the United States.

The people are wonderful, their minds free of worldly troubles, aside from the simple concerns like where to get a hamburger for breakfast and when the next baseball match is (in Chicago, one team is named after bear cubs!)

And while in a bar in New York I heard some locals complaining about the poor state of roads and bridges; all I saw with my own eyes was captivating. Including a worker eating lunch on the beam of a building and the rusty edges of a stairway leading to a metro stop, known in America as a subway, which is also the name of a sandwich: what a creative language!

How American it all was!

Next stop — Canada! Something about this country reminds me of France. Who knows why, since it’s a former English colony. They even say that French is spoken in some parts of the vast territory.

But I cannot confirm this. I will have to hear it to believe it!