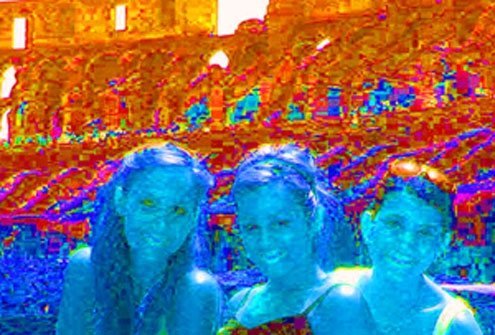 We were all independent women with strong American values who had no intention of setting them aside.
S

ometimes you learn what bella figura means the hard way. I got to Italy in 1994 with two female friends. We were all on vacation. We had no intention of staying on at length. We had visions of jobs at home. We were all independent women with strong American values with no wish to set them aside. Or so we said.

That’s when the best-laid plans began getting mislaid.

Our first summer we’d sit around having coffee — we’d meet on Sunday afternoons in a bar off a tree-lined street— and talk about what lay ahead. At first we’d discuss jobs in the States, which was followed by relationships, which ended up with our details of our Italian transformation.

Once three tourists, we were now all here for, Italian transplants, unless something dramatic happened. My temp job turned into a full-time one and I really wasn’t interested in trading in the benefits for a New York life. After all, I’d always dreamed of being in Europe, and here I was in… Rome. Plus, I was here with two of my best friends. We were like an miniature sorority that had drifted Italy’s way.

We talked about bureaucracy, how hard it was to make women friends, how Italian men (aside from liking American women) were uneasy around foreigners, how no one showed up on time, how people who got together to do something never could seem to make up their might just what it was they wanted to do. Instead, they’d stand around and debate the options. We laughed. We were in the country of the undecided.

Funny how that is, and isn’t.

A year in friend no. 1 actually married her Italian man in a ceremony outside Modena. Friend no. 2 was bridesmaid. I was a smiling observer. It was a modest and beautiful wedding, very low-keyed, more like California than northern Italy. They settled in Rome.

Then, friend no. 2 did the same thing, just south of Rome, in a marriage that was more like a Roman bacchanal. I gave up on the head count at 500. She also settled in Rome.

I didn’t marry, but I did find a small apartment in a side of the city that wasn’t well-developed, at least not then. By the time I blinked, we’d all been in Italy four years.

Sure, we still got together for our Sunday meetings, though soon they dropped off from every Sunday to one Sunday a month to a Sunday on holidays to “I’ll call you,” or, as friend no. 1 said in her flawless Italian, ci vediamo presto…

It didn’t take long to understand that presto meant its magical opposite, though face-saving didn’t let anyone actually say so. Telling anyone “See you soon” in Rome was something of a friendship death warrant.

Six years after we got to Italy, the three women who’d come from American, two from the East Coast and one from the West, had gone native. We were American in name alone. Italy had “turned us,” the way torture can turn prisoner, but in a compliant way.

Friend no. 1, an advocate of “natural looks” (and she had them), was make-up heavy when I even saw her, which wasn’t often. I was too “busy.” Friend no. 2, a stickler about keeping appointments, was late to the ones we set up. Texts entered the picture and we replaced meetings with messages. Then texts were pictures. Soon, a year passed when we didn’t even see each other once. And there weren’t even any babies in the picture, not yet at least.

Finally, I snapped. Sort of. My mother was ill and I was going home, and I didn’t know for how long. It was time for all of us to… man up. As in actually meet and catch up.

So we set a date, time and place. And made promises.

When that date, time and place suddenly didn’t work — everyone had a plausible excuse — we set a new one. When that one fell through, we set a third. We seemed very sincere. But then friend no. 1 had to go to Modena for a stretch and friend no. 2 was offended that we’d never managed to meet. Meanwhile, my mother got worse.

We did have one last round of conversations before I left, trying desperately to find the right venue and time. It even seemed like we’d nailed a real chance. Until friend no. 2’s mother-in-law showed up and our last chance went up in smoke.

On the plane I wondered how, in a country where face, and saving it, really did matter, we’d stopped seeing one another’s faces, at least the way we once did, as yammering American friends. It hit me then what bella figura really meant, which was working hard to look good and sound good, convincing yourself you’d said or done the “right” thing, or at least nothing that could make you look officially bad. Excuses excused even themselves. Sincerity did not come with follow-through.

Since bella means something entirely different — as in beautiful — I came to decide that the “I” in Italy really stood for something different, as in irony.

About the Author: Jane Redring