I can hear music 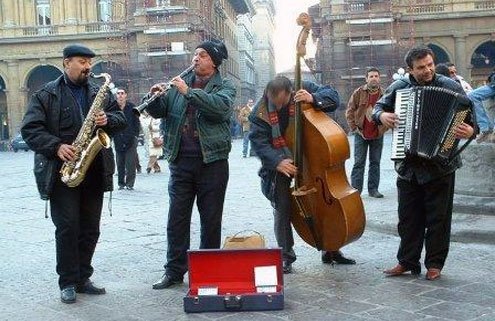 Street musicians in Florence.
I

t’s August in Via Dante, near Milan’s 15th century Castello Sforzesco. Most Italians are away on holiday, leaving Milan to foreigners. An afternoon rain has stopped. The sky is brilliant blue. French, Dutch, Japanese and English-speaking tourists stroll the cafè-lined pedestrian via, licking ice cream cones, and window-shopping. Street vendors and itinerant musicians take their positions near the castle, the way they’ve done for centuries.

Regulations date back to Rome in 462 BC, when the punishment for singing parodies or defamatory songs in the street was death. Nowadays, those who work a cappello — meaning they pass a hat or take tips but don’t charge a fee — have to register in their city of residence (assuming they have one) and request temporary permission from each city they work in. The rules vary. Jugglers and acrobats have given way to human statues but musicians remain. Charlatans are not allowed.

Thirty years ago, a violinist friend from the La Scala orchestra told me that he and three others once played string quartets on a Bologna sidewalk and earned more than they’d ever earned in the theater. Now, times are meager for street musicians. Their baskets remain empty. A few years ago, the renowned violinist, Joshua Bell, played his Stradivarius violin in the Washington subway and brought home $32, $20 from someone who recognized him.

This afternoon, my daughter Frankie and I listen to an old violinist sitting on a curb. Despite the heat, he wears a wool suit. When I drop a coin into his violin case, he invites me to observe a certificate propped inside the cover. Although it’s wrinkled and its flowery border blurred in places, as though the rain has gotten to it, it’s protected by a plastic envelope. It says: Opera Nomadi Milano, Università Cattolica Del Sacro Cuore. Opera Nomadi helps Roma — or gypsy — people to improve their public image by putting their arts and culture on display. This man looks to be South American, though, and he plays Neapolitan love songs. His sweet, soulful sound can be heard halfway up the road.

Just out of range, a Peruvian musician with wrinkled skin and very white teeth plays a contraption that sounds like a giant mandolin but looks like an old-fashioned, rectangular, dining room table, nicked and scratched about the legs. Inside, it resembles the inside of a piano, with metal strings attached to a metal frame. It even has a damper pedal. He hits the strings with beaters that look like Chinese back scratchers wrapped in cotton. Using a marimba-type technique, he produces long tremolos. He calls his instrument a cembalo and says he has a degree from the conservatory. As we leave, he plays the theme from the movie “Dr. Zivago.” His wife waits for him nearby in a wagon. Both he and the violinist play well but neither has attracted an audience.

An elderly Asian man, with a bulbous nose, fares better. He sits cross-legged on a slab of Styrofoam surrounded by turnips, beets, carrots and radishes. Using a small knife, he whittles them into life-like roses that girls are wearing in their hair and on their handbags. Some 20 people watch him, fascinated by his controlled hand movements. The rest of him is immobile. He acknowledges no one until a coin hits his basket. Then he brings his hands together and quickly bows.

On a nearby bench, a human billboard sits with his back to the rose carver’s audience. On his white tee shirt is a message, written in Russian with a black, felt-tip pen. A Japanese family lines up behind him for a photo. The man is very thin. He speaks English, not Italian. Soft spoken and polite, he seems embarrassed about his shirt. He won’t tell us what it says.

All along Via Dante and in Piazza Castello strolling vendors sell string bracelets, books, purses and toys. An artist has set up an easel and turns out paintings of the castle and nearby park.

A teenage South American boy rests a half-size harp upon a stool and plays sparkling arpeggios that seem to shimmer in puddles and in spray from the castle fountain.

At 6 p.m., church bells chime loudly for several minutes. When I say it’s been years since I’ve heard bells ring like that, Frankie says they ring them that way every day but, with the city in full action, we just don’t notice. We only hear them in August.

As we head for home, we recognize a homeless man from our neighborhood waiting at the tram stop. He looks like Santa Claus with a button nose and long white beard. He stands bent, a bag slung across his back. He’s unaware of the human activity around him. We know that, even if the tram is crowded, the seats near him will remain empty because of the smell. Once, a neighborhood association offered him an apartment. He didn’t take it. He is like the cats that prowl the giardinetti, searching for cover if it rains and scavenging for food.