I Am the Brother of XX 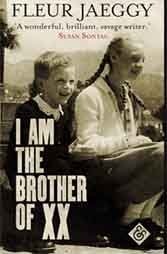 By Fleur Jaeggy, translated from the Italian by Gini Alhadeff

In Fleur Jaeggy’s title story, which opens this mordant collection, a melancholy boy reminisces about his pretty sister, interested only in his “non future.” Or so he thinks. He is eight. It is 1945. The boy suffers from a nightmare, “the one and only nightmare, of living. Of the importance of living.” Swiftly, silently, the rest of the family bloats Jaeggy’s poisoned territory. “At home we all take sleeping pills. All four of us. The way others take fruit. Usually in families fruit is given to children, in ours sleeping pills.” The boy’s estrangement increases over the years. So, thanks to his sister, does his sleeping pill dosage. “Sorrow likes to give advance notice,” says the boy, and that it does. The narrator of course is dead, and these cursed and biased musings come straight from the afterlife.

In “Last of the Line,” the firstborn of a wealthy Swiss family, an old bachelor named Caspar, feels at one with a portrait of his two dead brothers, killed in their youth. He tries coaxing his siblings back. They do not listen. They never did. “All is set before it happens,” says Caspar, who shoots his dogs, then himself.

Swiss-born Jaeggy (who writes in Italian) has always been most at home inside the world of the minus, where all, to her, is in its right place. Her characters are passengers within the incidents they provoke. Life is a fleeting framework, not some generous infusion. Subtraction is always at the ready. Confines loose their moorings.

Her fictional law is reflected in a character named Regula (“The Gentleman and the Lizard”): “They don’t know what the void might be. And believe that an empty life is contemptible. Not so.” Regula converses with her cup and gives life to a portrait. The portrait responds. The gentleman portrayed grows restless, to no avail: “Even that gesture was an illusion. There was no place called the end.”

Jaeggy’s capacity to sing the pithy but erudite songs of human vacancy in many keys is as unique as it is uncanny. Her terse, seductive sentences give morbidity rare enthusiasm. Consider this little back-and-forth in “The Ascetic Room,” between a patient and a damaged friend in a Rome burn unit: “Old age, she said, is horrible. It’s all horrible, I’d tell her. With a kind of glee.”

In “The Heir,” Fraulein von Oelix raises a destitute orphan, treating her like a daughter. A fire breaks out. But her Hannelore does nothing: “Evil is the best form that the highest good can take,” she thinks.

In “The Aviary,” Stefan — he of the “celestially mean eyes” — forbids his wife from touching his mother’s things (“My mother didn’t love you.”) But she ignores him. His “mean eyes” will soon take revenge.

All Jaeggy accomplishes she does with in burn unit spirit, with a kind of ferocious, sans-Christ glee. It is as always at once alarming and sublime.