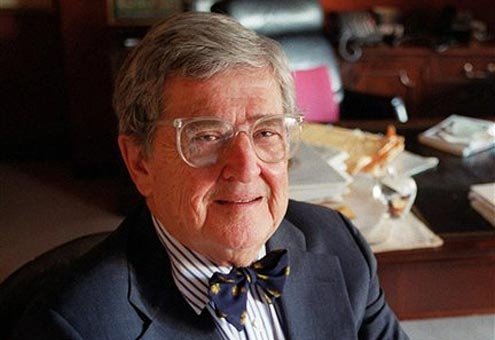 onsidered an editorial genius by some and an unbearable autocrat by others, New York Times executive editor A.M. Rosenthal (1922-2006) — Abraham Michael Rosenthal — was known to friends and foes alike as Abe. In 1988, he stepped down from his Times post at age 65 and begun writing a column, “On My Mind,” that some critics swiftly and acidly panned.

I, too, had begun writing a column, for a suburban newspaper chain based outside Washington, D.C. I had met Abe while unsuccessfully vying for a job in the Rome bureau of the Times and we had remained in touch. We met in Rome’s Excelsior Hotel in 1985, when the newly remarried editor appeared dressed in Bermuda shorts and smiling.

I didn’t get the job — a decision he explained with immense graciousness. Still, we kept in touch. I sent Abe several of my pieces while advising him not to take his critics too much to heart, since the tone of their attacks seemed spiteful if not envious, at least from a young fan’s point of view.

In August 1988, I also sent him news of mother’s death. Though Canadian-born Abe was not known for newsroom sentimentalism, his poignant response reflected a sense of humanity that transcended status or position.

His Times column gradually fell from favor and was eventually discontinued, though he found various homes for it elsewhere. In his final “On My Mind” column, he wrote: “I thank God for (a) making me an American citizen, (b) giving me that college-boy job on The Times, and (c) handing me the opportunity to make other columnists kick themselves when they see what I am writing…”

He did not, to my knowledge, ever write about the savage reception the column met with. Once upon a time, power concerned the exercising of discretion — unless wives or mothers were publicly challenged. Those days are gone.

There are simply no words to assuage true grief. I know that. Nothing I can say or should even try to say can diminish grief. Sorrow at the loss of a mother. But still there is a desire to reach out and make human contact and give you an embrace.

I enjoyed reading your columns, Christopher, I do not know whether they are the kind of columns that could be syndicated or that every paper would want. I do know that they speak terribly well of you — a bright mind and an engaging personality, a good man.

I think, that at this point, you have to ask yourself whether you really love the newspaper business. If you do, if you do love it, push ahead. If not, not. There are other lives, and newspapering can be very painful. It’s not worth it if it doesn’t give you pleasure. That’s not wonderful advice, but it’s about the best I can think of, truly.

I do not know why I have been so vilified. That remains a puzzle to me. I am not the man I am portrayed. I’ve had faults, obviously. But these monstrous attacks on me are not only out of proportion, but are totally concocted. I do not understand what is going on. I do know that something has entered the newspaper business and journalism in general that was never there before — the use of the lie as an everyday weapon. I cannot write about it at the moment, because I am so much a target. But one day I will.

Christopher, good fortune to you.

(Dictated and signed in his absence.)