I am so indie 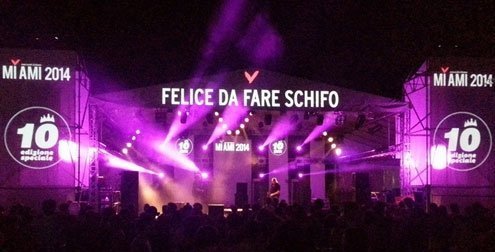 The Musica Importante a Milano music festival, or MI AMI, is now into its 10th year.
G

etting into the recently concluded Musica Importante a Milano festival had a cheeky side appropriate to an alternative music festival whose name translated into the irony-drenched “Important Music in Milan.” On the second day of the three-day event known as MI AMI, concert-goers had their hands stamped with the words I WAS THERE.

The “there” was the Circolo Arci Magnolia, a tented venue near the manmade Idroscalo Lake on the outskirts of Milan. In its 10th edition, the festival attracted waves of roaming twenty-something eager to sample a lineup of crooners, rockers, rappers and DJs who performed on three stages from mid-afternoon — never mind the daytime heat — into the early morning hours.

Despite audience rapture — attendees went heavy on phrases like “life-changing” and “meaningful beyond words” — chances are that no one will ever hear the life-changing music on commercial radio. MI AMI (a play on words that means, “You love me…”) emphasizes acts “that for the most part do not live on mainstream media,” said Davide Toffolo, lead singer of “Tre allegri ragazzi morti” (“Three Happy Dead Kids”), a punk-folk cult band that records and distributes on its own “La Tempesta” label. “What’s nice about a festival like MI AMI is how the music creates a community of people who connect and share the same vision of the world.”

Organized by rockit.it, a thriving Italian portal that is also a magazine and aggregator for alternative music, the festival is heavily attended by cognoscenti who follow bands that play in Italy’s network of underground music venues. Once, the names of bands and their songs spread by word of mouth, but the landscape has since widened thanks to web chatter and social media.

When “Tre allegri ragazzi morti” performed, thousands sang along, some wearing the iconic skull masks that band members don for every performance. “The mask creates a bond between those of us on stage and the audience,” added the 49-year-old Toffolo, who is also an artist and cartoonist. “It also suggests the idea of being alienated from contemporary society, a concept we inherited from Pier Paolo Pasolini. We might have sold more masks than records, but that’ s fine.” Pasolini, a writer-director, was Italy’s cultural enfant terrible in the 1950s and 1960s, revered for his biting denunciations of middle class life and values.

“I tre allegri ragazzi morti” got its start 20 years ago and has recorded nine albums. The band is a staple of the Italian independent music scene, though some reject the independent moniker as limiting.

“Independent doesn’t mean shit,” said Zen Circus front man Andrea Appino, whose band has eight LPs to its credit. “Everybody is ‘independent’ in their own right. I mean, Laura Pausini might be just as independent as we are. I’m betting no one tells her what she has to sing.”

Mentioning Pausini is tantamount to musical blasphemy, at least for Appino. She’s a mainstream Italian pop singer who couldn’t be more removed from non-conformity of any kind. But Appino is trying to get to the meaning of independence. “Some people think artists are independent only if they produce or distribute their own music. Which we don’t do and we don’t think is necessary to be artistically independent.”

The band, which got its start in Pisa two decades ago, was financed through credit. “We got a loan to buy instruments and a van for gigs. That made the day we paid it back a highlights of our band’s career and a successful conclusion of an experiment in micro-economics.”

Another band, “Lo stato sociale” (“The Welfare State”), is composed of three young Bolognese musicians and also drew adoring crowds. One of their hits, “Sono cosi indie” (“I Am So Indie”), is littered with mockingly ironic references to Instagram, Twitter, Raybans, vintage sunglasses, weird t-shirts, deejaying, hard drugs and anorexic girlfriends. The underlying idea is that “in” can actually be “out.”

“We wanted to describe a world that doesn’t really exist or make sense, and we wanted to use the faces of the people that are, willingly or otherwise, listed as members of the world to which we belong,” says cherubic faced front-man Lodovico Guenzi. “So we shot a video using just an iPhone and asked fellow so-called ‘independent’ musicians to sing our lyrics.” The result is a kind of hilarious inside joke.

Among the musicians in the low-budget video was songwriter Federico Fiumani, leader of the cult band Diaframma, which got its start in the late 1970s and is considered a forerunner of so-called “new wave” and Gothic rock. Fiumani, who also appeared at the festival, now has a new generation of fans.

As I sat down to chat with him, a tattooed, bright-eyed and clearly star-struck young woman jumped in. “Your songs opened a new world to me,” she told him breathlessly.

“That kind of thing makes me feel happy,” Fiumani said afterwards. “That’s why I write and why I sing. I want to convey emotions. If that happens, well, it makes my life complete.”