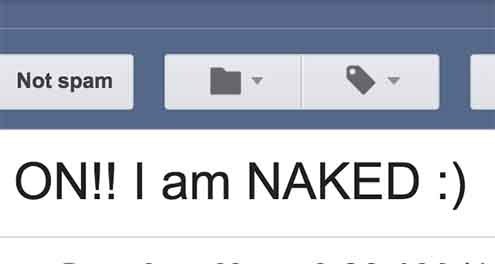 Drop your guard for a second, and nakedity beckons…
Y

esterday, a charlatan email somehow penetrated my spam filter, which my mind’s eye sees as an enormous spinning wheel with sharp and steely spokes. Anything the wheel detects as alien or impolite it immediately absorbs into a blending device that strips the incoming words of their skin and tosses their carcasses to a group of waiting wolves. Since most of the words that head my way are in fact alien or impolite, the wolves never go hungry and the wheel stays busy. This is reassuring since security matters to me. I also like wolves.

Once in a while, though, the wolves nap or the blender breaks down or the words are so full of voluptuous impropriety they manage to woo even the sharpest spoke into inaction.

That’s what Amy did yesterday, using the oldest trick in the book, the Mata Hari gambit. This involves the application of distraction and, when necessary, implications of nakedity, which isn’t a word but should be since it’s a staple of 21st-century online wolf-fooling.

In any event, Amy bypassed my wolves by behaving like a braze hussy in both her subject line and text. So loud was her proclamation — unlike like, say, “get lucky” — that even the wolves cowered.

My experience with wolves (and blenders) is that they tend to lose control of paws and blades if presented with sufficient capitalization, particularly if season with exclamation points. They associate the duo with urgency, as if Amy were saying, I LOVE YOU!!! or LET’S EAT CHINESE!!! or even ELECT ME NOW!!! The tone is so confident that spam seem suddenly like caviar, or goose, or a solution to the mortality algorithm.

In other words, wolves and their filters are suckers for loudmouths, which explains why Amy (fully clothed) burst through so easily through my front door, and why Donald Trump can do the same, though he never offers nakedity.

The more capitalized and exclamation-stacked Amy is, the more provocative she feels, faking out my guardians and leaving me exposed to all manner of banshees, witches, strange politicians and NAKED girls with their CAMS ON!!!

I did the right thing of course. I immediately replied to Amy asking her to please take her wooing elsewhere and above all turn her camera off. But that was a mistake, since spurned Amy fed my name to her friends.

Tiffany, Ariana and the infamous Becky Beaver all arrived on the scene, a fierce troika that has my wolves confused. CHEAT ME!!! said Ariana (omitting the “with”), while Tiffany pledged NOTHING BUT FLINGS!!! Becky Beaver went so far as to say she had a place for my BIG ONE!!!, which in fact I sold years ago.

I’m working up the courage to write to all three of them explaining that I belong to the old school in which flirting and small talk matter.

Meanwhile, though, the wolves are getting used to all this loud nakedity — SPANK ME!!! demands Rachel — and I’m coming to realize I may have lost this battle.