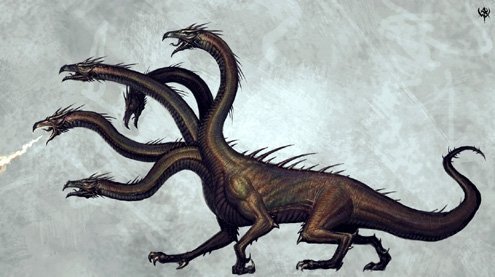 Candidate as benign Hydra.
A

ccording to an astute conservative observer, Barack Obama is two-faced. One half is articulate and compassionate, the other streetwise and merciless — the “Fast Eddie side,” he calls it. “[Obama] speaks so calmly and polysyllabically that people fail to appreciate the Machiavellian ambition inside.”

The thesis: Don’t underestimate him.

No argument there, but there’s a bigger fish to fry.

Running for president of the United States has become a vicious little pill. Not hard; not ungrateful; not Eagle Scout challenging: downright vicious.

Recalling an idyllic “once upon a time” is meaningless. Vicious is not new. What’s new instead is tone and scope. Ad hominem attacks prevail. Public character assassination in small doses is national entertainment, taking the place of more pointed malice once doled out by party machinery. For decades, candidate and party worked in tandem against political adversaries, hoping later to divide the spoils. But since media spiked the punch, morphing into a 24-hour narcotic, lie-merchants and rug sellers populate the big top. Strategists and spin-doctors hired at the behest of rhetoric serve bloody steaks to their secret employers, journalists.

The Machiavellianism assigned to contemporary candidates responds in part to the bullying sepsis that permeates American egalitarianism. Transparency and sensationalism — the instant reflex that connects faux pas to ridicule — has birthed a breed of politician that worries less about deception than how to manage it. Forty years ago, aspects of what’s been written about Obama, John McCain and Hillary Clinton might have been thinkable but not writable. Media manners marginalized outrageous disrespect. Now, praise and contempt are video and blog-fodder for the networking classes. Poorly-trained free speech ensures the triumph of overstatement. It also neutralizes elegance.

This adjustment is vital to understanding the development of the new presidential reptile. It sheds and molts. It changes color. It repackages and re-promises. It adjusts instantly to resistance, seeking another, more malleable path. It can guess what’s up ahead because forecasters exist to foretell pitfalls. Once, campaigns blundered into tornadoes, words spilling from the back of clammy trains. The unrehearsed is now unthinkable. Presidential politics has its own Weather Channel. Highway blocked you take a back road. Opportunism not a negative but, as the original Latin intended, means to a proscribed end, carcasses devoured while excusing the stench.

Bottom line: Candidates are salesmen not saints. Probably the last unsullied presidential contender was Eugene McCarthy, an anti-war poet who stood on deck as his ship went down, torpedoed by Bobby Kennedy. Like Kennedy, Obama is a hope-peddler. Like Kennedy, he’s impure (which is to say sullied by compromise). Unlike Kennedy, he’s likely to win his party’s nomination, after which the meanness dial will go up another notch. Anything less than Machiavellianism and you don’t survive.

Obama is more vulnerable to critique because his message of hope attracts and repels in near-equal measure. Seekers of reassurance turn to him to feel in reassurance’s presence. Lovers of reproach resist promise as an invention of the weak, seeking to debunk the (liberal) patent medicine hawker they suspect lurks behind it. It’s an unremarkable polarity that would remain unremarkable were not for an exponential growth in national noxiousness.

There is no precedent in modern political history for the democratic persecution a candidate must endure to attain the American presidency. Unabridged shamelessness is so unexceptional it’s commonplace, bad news in any society. This amoral reality — which defends defamation by correctly labeling it “free” — begs reassessment of the moral currency by which a candidate is judged. The tools and methods of Machiavellian ambition are requisites to any presidential pursuit. So are two faces, perhaps more. Each one unabashed. Candidate as benign Hydra. “If we’re going to have a president who is going to go toe to toe with the likes of Vladimir Putin,” writes the columnist, “maybe it is better that he should have a ruthlessly opportunist Fast Eddie Obama lurking inside.”

Or maybe a ruthlessly opportunist society requires someone in its unacknowledged image to lead it.