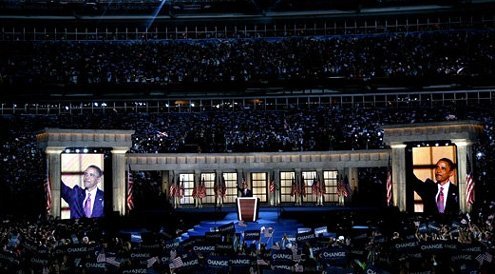 yperbole can get in the way of measuring the genuine impact of American political events. Depending on the source, the night of Barack Obama’s Colorado nomination was “huge,” “historic,” “a place you had to be,” a paragon of “amazing visuals,” and an event the 80,000 onlookers “will remember all their lives.” The massive pageantry included faux-Doric columns, 24 giant American flags, 450 spotlights, and vendors hawking T-shirts with the words “I Was There to Witness History.”

Imagine Mohammed in the big city, preaching to his choir. He delivered.

But the torchlit excitement lasted all of 12 hours.

The next morning, John McCain selected an inexperienced Alaska governor as his running mate. The distracting one-upmanship worked.

A new slew of adjectives immediately made the rounds: “Daring,” “stunning,” “improbable,” “surprising,” “unwise,” “brilliant,” along with “shaking up the political world” and “former beauty pageant queen,” the latter for spice.

Politics is by nature circus-like, and the American presidential campaign its greatest show. But hyperbole has limits, or should. Push hard enough and you fabricate nonsense. Push harder still and the impressionable are delivered into enthralled belonging. In the absence of anti-establishment sentiment, the identity of what they belong to is the property of image-makers. Nothing is left to its own devices lest they fail.

One response is to shrug it off: What’s a political Party without a real party? Richard Nixon’s campaign once hired convention floor “fans” to cheer for “The One.” The amoral contrivance was put aside when an even more dubious side of Nixon’s ethics emerged.

But while excitement is a noble sentiment, and no doubt vivid, the manipulation of emotion, whether it’s affection or rage, is decidedly less appealing and more the norm.

Heavy-handedness is an industry, with 24/7 tabloid half-truths continuing their public ascent from tumbleweed diversion to standard repertoire (fulfilling Marshal McLuhan’s “medium-message” prophesy). Sincerity and bias are intentionally confused; rehearsing the spontaneous is an acceptable paradox; much is called “unprecedented” when it’s not; opposing critical thinking to sentimentality is sour grapes.

September 11 set the precedent, or the benchmark. Public trauma was assuaged through precaution and control. Sloganeers built homes within the threat matrix. Drug ads still remind patients that while they may feel secure they’re never really safe. Menace is a constant. The mother of all crises is the one waiting to happen. Political advisors tell their clients the same.

So there is profound comfort in staging, whether reality shows or convention. Less can go wrong. No wonder the elaborate opening ceremonies at the Beijing Olympics, perfectly executed, produced envy and some skittishness. A spectacle of unprecedented scope belonged to the Chinese. “Start teaching your kids Mandarin,” quipped one columnist.

Obama spoke little of China or of Russia. Though he mentioned diplomacy, his view of the world at large still hinged more on containing threat than milking prospects. Such is the thread of the times.

Despite Iraq, or perhaps because of it, the American electorate remains passive. It considers opposing the war a sufficient pledge. It does not take issue with enhanced security. It dutifully removes its shoes. It appreciates being wowed. If mud needs slinging, there’s the Internet. Civil disobedience is unthinkable. Radicalism is more freakish now than any time in American history. The country’s few demonstrations are mostly ignored.

It’s not about me, Obama told his devotees, it’s about you. The “you” in turn seems content to hero-worship, to text, and eventually to vote.

The presidential election has become a race between a promising young black man of impressive rhetorical skill and an aging but stubborn white veteran (now with a young conservative in tow) who must appeal to the right while insisting he’s also his own man. Neither is likely to do much but insult the other before they debate in October. In the meantime, space-filling modifiers won’t rest.

Enlarge events to suit immediacy and gasps prevail over breathing. Unrelenting show-and-tell makes crisis and heroism into bromides and crying wolf into an art form. “The child is father to the man,” wrote Gerard Manley Hopkins in a famous poetic opening. But the second line’s the grabber: “How can he be? The words are wild.”