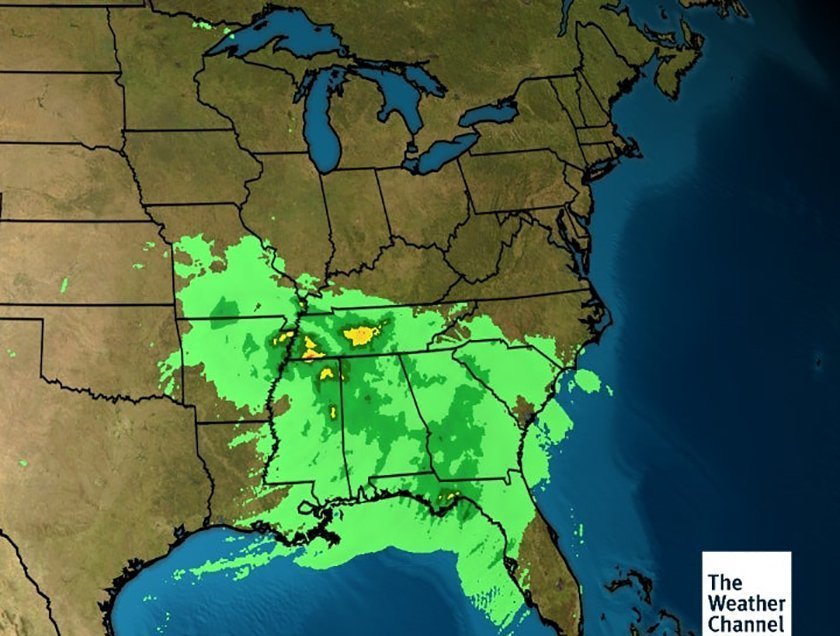 A tale of one man's surprising devotion to the Weather Channel.
I

n the few years before his death in the mid-1990s, something extraordinary came over my uncle Hubert, who was born in Prussia. A man of rural stock, he had grown up on an outland German homestead. Disparaging all forms of “modern” communication, he became suddenly enchanted (if not mesmerized) by the Weather Channel. It was his American wife, who had died a decade before, who first brought a television into their farm home in Illinois. He had barked and grumbled for days after its appearance – and it was already the 1970s – but she would not be moved. She had come to like soap operas, introduced to her by a friend, and she wanted the soaps at home.

He would walk out of the living room as soon as she turned it on, often taking a walk or pretending to repair a tractor that wasn’t broken. More to the point, his farming days were over, co-opted by larger agricultural combines in neighboring counties. “Diesel monsters,” he’d call them for no apparent reason aside from their plethora of mechanized harvesting equipment.

This grumpy live-in-the-past approach is what made his new meteorological love affair all the more startling. Instead of finding him in the yard or cleaning the soles of clean shoes, I’d instead find him in the den where his American wife Esther had once sat with her soaps. For whatever reason, one day he’d turned on the TV (perhaps while trying to pull out the plug) and heard a man or a woman talking about fronts and pressure, which as a farmer were words he knew. This perked him up and he came to occasionally turn on the TV to see the images of fronts and videos of clouds and images from space. He grew more and more absorbed, as if he’d been named, for no apparent reason, an astronaut on a mission to Mars.

Science was never pure science but an ad hoc mix of measurements and soothsaying, and the Weather Channel appeared to satisfy his need for both.

He turned avid, telling me about forecasts for the area and the region and pointing out one broadcaster, an auburn-haired woman he would gladly dance with, and he told her as much whenever she appeared on screen. She paid no heed to this impossible wooing, preferring to talk about the weather in Chicago, which was to be the windiest of cities today, or to emphasize her penchant for “perky” high pressure systems.

Even our phone conversations began to revolve around weather, as he’d tell me how a typhoon was different from a hurricane and quantify the grades of hurricanes by force, and how it was only America that possessed the strange concept of naming storms. “An ‘Esther” does not destroy your property, except here, in this country.” Women, he said, induced other kinds of harm, and joy, but I was too young (at nearly 50) to hear about such things.

Part of his devotion to weather was based on the art of forecasting, which he never spoke of as a science but as a kind of faith in the recognition of patterns that had come before and would thus come again. “Once you are very sick, the first time, as a child, you know it will come again, and you are afraid of it.”

Science was never pure science but an ad hoc mix of measurements and soothsaying, and the Weather Channel appeared to satisfy his need for both. He received practical data about rainfall but it’s exactness was always elusive, based on estimates, detached from the human reality that comes, say, from a farmer looking out his window and calculating a downpour’s might based on how close to the lower barn window the rainwater rose.

The Weather Channel, all in all banal, was for him a bringer of mystical thinking, of possibility and threat, sometimes unfulfilled because despite all their “diesel” tools even the expert meteorologists sometimes got it wrong. The furious clouds did not do as they were told over city “x” but chose instead to go with whims of a prevailing wind that took a forecasted storm fifty miles to the north.

He, too, became a reader of entrails, peering at the satellite maps and muttering about a formation in the corner of an image that he found daunting but no one else, not even the woman he wished to dance with, took notice of. He was disappointed when these young people failed to see what he considered obvious. In fairness, when he was wrong and they were right, he’d wave his frail white palm at them, as if issuing a papal benediction.

“I always knew what tomorrow would bring,” he once told me, “and I behaved before it happened.”

I asked him why, since he liked the weather report so much, he did not also look at the news. I told him there were now dozens if now hundreds of channels. To which he’d cryptically reply, “Just the one planet for me. That’s all I need,” as if news were another planet – as it may in fact be.

When he was hospitalized (against his will) for a cancer operation, he insisted the Weather Channel remain on at all times. But there could be no sound, a nurse told him. “Does not matter. I see into these things for the ahead.” She, like many others, left bewildered, and perhaps to some extent I left in much the same way, since one day he simply died in his lounge chair – in front of the TV of course, and with clouds and winds and storms headed his farm’s way, in the end forming a tornado that leveled five homes in his vicinity.

Maybe he knew this was coming, or felt the texture of the air shifting, or saw the quivering trees begin to bend a bit too much. “I always knew what tomorrow would bring,” he once told me, “and I behaved before it happened,” and by behaving he meant “acted.”

He did just that before the tornado came, and feeling no wish to seek shelter, took the next best road.