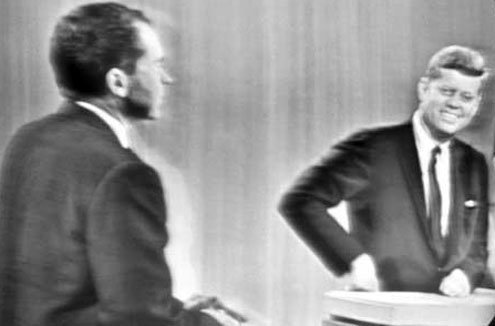 Nixon-Kennedy, 1960: But men were uneasy but only Nixon broke a sweat.
A

merican politics has always invited hyperbole. Reaching distracted millions means establishing and repeating sentimental generalizations about complex subjects in hopes the trimmings of party loyalty and faddish attraction will do the rest. Few read attentively (except perhaps the producers of the words). Few have time enough to comb through party platforms. Most voters base national political choices on a combination of glorified gossip and incidental information filtered into day-to-day life through mass media reports and their second-hand fallout.

Candidates are largely the sum of expensive machinery intended to fatten and flatter their strengths. Bias, based on upbringing, regional preferences, is inescapable, though it’s grown far crueler and more divisive in recent years as a result of the verbal violence generated by a system of instant communication that prizes adolescent combativeness and accepts casual cruelty. Candidates can be obscured by the hubbub around them.

The coiffed layers of dream-machinery around the candidacy of Barack Obama four years paid little heed to the underlying fatalism of the candidate himself, who seemed more like a surfer placed atop a wave than one who’d spent years seeking to be perceived as someone riding the perfect one. Instead, he appeared very much a sane man propped up by a temporarily insane nation in dire need of the tonic his slogans embraced. The madness wasn’t limited to the United States. Obama, pity him, was awarded a Nobel Peace Prize for little except his stirringly cathartic victory.

These observations, which naturally reflect their own bias, are pertinent to the ongoing presidential race, which sees the one-time purveyor of dreams (now old news) pitted against a Mormon billionaire who until he fared well in a recent debate had been the butt of both liberal and conservative caricature, both for his wealth and his seeming disengagement from the American common man (a common man whose actual identity, in a deeply diverse nation, is harder than ever to identify). For months, Mitt Romney was little more than an inert hostage to his own costly and often detrimental image machinery.

Then came the first debate.

Debates are themselves artificial, weighed down both by rules and time limits, circumscribed also by advisors who tell sparring warriors not necessarily what to say, but what to avoid. It’s spontaneity by design. Yet the encounters still matter. People are invited to look at two men who want the same thing at the same place and time, with contrivance slackened. The past is briefly neutered. All judgment is fair. Revisions of standing viewpoints are allowed if not encouraged.

John Kennedy, a bundle of nerves, “out-dueled” Richard Nixon in 1960 above all because Nixon sweat profusely, and it showed. Kennedy won on cosmetic points alone. Jimmy Carter smiled, spoke with a drawl, and seemed far less burdened than bumble-prone incumbent Gerald Ford; he won. Ronald Reagan, an actor by trade, ran rings around wearied Carter in 1980, talking to the camera as only an actor could. Bill Clinton liked himself and his policies so passionately that even the president at the time, George Bush, seemed to appreciate his verve; and it showed. Al Gore, Clinton’s vice president, had no answers for Bush’s son, then the Texas governor, who was fearlessly folksy, endearingly so, at least to some.

People listened and watched, probably doing more of the latter, attempting to determine which of the two men on offer they liked best, the only sentimental viscera that can unpredictably cancel out bias, or temporarily paralyze it.

For months, Romney was portrayed as a remote Republican determined to pander to his party’s right wing to secure a nomination he was unable to get four years ago. He was a winner by default in a weak field. He was, when pitted against rivals within his party, uninspiring but workmanlike. The workmanlike side seemed to collapse as the presidential campaign kicked into gear, with ill-advised statements distancing further from wage-earning mortals, helped along by attack ads focused on his tax-paying history and his billions.

Finally, however, it came time came to spar with his immediate opponent, and he made the most of it by escaping months of caricature and, political preference aside, behaving like a decent, sensible and intelligent human being. Not a bad thing outside the freely insatiably and hate-prone world of both mass and social media, the newfangled presses of old-tabloid bias.

Non-pugnacious by temperament and clearly polite by upbringing, Obama showed little verve. Most of all, he failed to transmit resentment, a near-criminal act among those who consider partisan diatribe as essential entertainment in presidential politics. No doubt the tone will change in coming encounters, with each candidate now enduring lectures on where to go from here, and how to score points.

But what the debate demonstrated, haphazardly at times, is that there are in fact two men running for president, and that neither is without flaw, but that both possess an intrinsic reasonableness, which is a good for bogeyman-susceptible nation to know.