How you get better 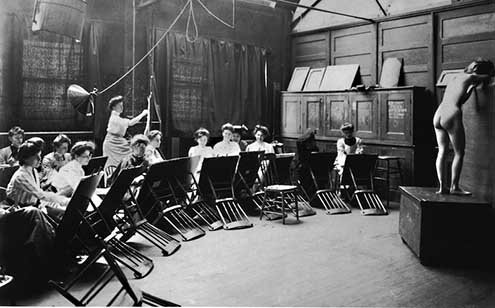 New York's Art Students League, on the city's West Side, was founded in 1875.
I

’m not here to make friends. I’m here to learn my craft.” He spoke the words with nonchalance and quiet conviction. Nearly 20 years later I still remember them.

I had just moved to New York City. My intention was to live a creative life, to be an artist. I had no idea what that would take in a metropolis as large and expensive as New York. Naiveté is a boon to dreamers.

I started by taking a drawing class at the Art Students League, a city institution established in 1875. The League offers classes in a variety of disciplines to students of every level. Artists such as Jackson Pollock and Georgia O’Keeffe studied there. Now it was my turn.

In a room set up with 15 easels, I took my spot. I didn’t know what to expect, though I was eager to learn, and with luck make some friends since at that point I knew no one.

I set up my 18 x 24 drawing paper on the easel and broke out my new supplies. I had a kneaded eraser, a blending stump and a variety of pencils. The class faced a stage where a nude model would hold a pose. In 20-minute increments we’d set out to capture the human form on paper. I was anxious. I shuffled my feet at my easel and waited.

The young man next to me seemed poised. His paper was clipped at the corners and his pencils sharpened and aligned in a row. I took a chance and spoke to him.

“Today is my first day of class. I just moved to New York and I’ll be honest, I have no clue what I’m doing.”

“I’m Thomas,” he said smiling, extending his hand. “Let me see if I can help.” He eyed my set-up and suggested changes.

“You’ll want to get a good view of the model and make sure you have even light on your paper. I suggest you move the easel a bit to the right, like this.”

He then moved on to my pencils. “You’ll want to sharpen them with a razor like this. Then use a bit of sandpaper to get the point you want. Remember, just try to have fun. You’ll do fine.”

The instructor entered and gave a demonstration drawing. He threw out terms I’d never heard and used the pencil like a paintbrush. He rendered the model with panache. He made it look easy.

Then it was our turn. Once the pose began, I made a few preliminary marks on my paper, trying to capture the gesture and general placement of torso and limbs. I felt clumsy and awkward. I realized I’d never really looked at a nude human body with an eye toward detail. In fact, nudity usually required an averted eye. Now, the context had changed.

When the timer rang, I stepped back to examine what I’d done. The model’s legs were too short and the arms were thin and lanky. It was all out of proportion. The shadows on the figure escaped me. By the time the two-hour class ended, I had improved little if at all.

“Horrible,” I said with a grimace.

“Stick with it,” he said with an encouraging smile. “That’s how you get better. See you next week?”

Though Thomas was true to his word: he hadn’t come to the class to make friends, he did take me under his wing. With his tutelage, I made encouraging progress in the months that followed. Yet the demands of New York life began to weigh on me. I left the class to focus on getting a job and a decent place to live. My artistic pursuits were put on hold.

Since then, much time has passed. Longings resurfaced. I wondered if I should start drawing again. I also thought about Thomas: would he remember me after all these years?

It took a simple web search to learn what became of him. Thomas was still at the Art Students League, where we’d first met, but now as a premier instructor. His bio included a list of prizes and awards from the country’s top museums and art institutions. One even gave him the designation of Living Master.

Wow. I thought. This is what happens when your craft is your focus. I quickly drafted an email and sent it to him at the League.

Happily Thomas responded with enthusiasm. “What a nice surprise to hear from you again! Come out and draw,” he wrote. “I’d love to see you.”

Now, Thomas is my instructor at the League. With the same pad and pencils from my first attempts, I scratch and scrawl, once again in pursuit of gesture, weight and balance.

And when my efforts seem unlikely to capture the form before me, Thomas arrives by my easel. “Try focusing on defining the legs. It will give the image more weight,” he says. “And consider the arc of the torso, like this.” He uses his pencil to add directional force and set my proportion right.

In his calm and reassuring voice I remember the young man I first met, filled with conviction for his craft. His kind words still apply.

“Stick with it and remember to have fun. That’s how you get better.”