How To Read the Air 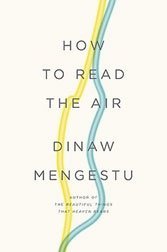 Mengestu’s second novel is backhanded homage to Emma Lazarus’ Statue of Liberty sonnet, which lionized tired, poor, huddled and wretched, the “refuse” to which America opened golden doors that in many cases were no more golden than those who passed through it.

Jonas Woldamariam is a thirtyish second-generation Ethiopian-American born to refugee parents in Peoria, Illinois. Like all Mengestu narrators so far, he’s a politely shy young man with elusive self-esteem. “I had walked for a long time with my eyes half-closed,” he says in one of his musings. They’re rarely fully open. What begins as an account of his ne’er-do-well father’s “honeymoon” trip from Illinois to Nashville in the late 1970s, pregnant mother Mariam in tow, evolves instead into a story of parental abuse and two marriages without a future, Jonas’ parents’ and his own.

As a freshman English teacher at a New York Catholic academy, Jonas throws caution to the wind by fictionalizing his father’s life to his students, as if by conjuring up a family myth (at the risk of his future) he might finally banish his own banality. But meeting the demands of these parallel stories forces Mengestu into an awkward two-step. Each forward step in Jonas’ present day New York City life is made to shuttle backward, or sideways, jarring tone and texture.

“You’re a brooder,” Jonas’ wife Angela tells him early on. So is Mengestu, who whose Jonas is nowhere man who once worked at a local refugee center where he casually embroidered immigrant tales to ensure better placement: “I assigned them the narrative I thought they deserved.”

Jonas’ poignancy is just as casual. “There is nothing so easily remade as our definitions of ourselves,” he says. Therein the dilemma: Jonas, at once liar and remaker, never find his own pulse. This is a novel in which no one blooms. The exceptional focus the author brought to bear on “The Beautiful Things that Heaven Bears” is largely AWOL.