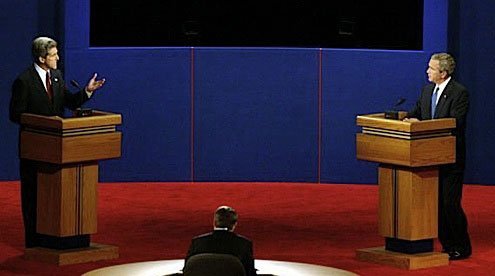 In fact, only two young and scared women were liberated, and for a bounty. The cash will likely find its way to arms dealers, squaring the blood-circle in much the same way as the millions of dollars Washington has pitched to Afghan and Iraqi warlords in exchange for dubious loyalty.

When the liberated Italian women, both named Simona, failed at first to thank the pro-war Italian government for its mediation (they did later, tepidly), the mood turned sour. Rightists labeled the women leftist, which they are; leftists assailed the war, again; and the hostages, interviewed repeatedly (Q: “What did you do with the time?”; A: “We were stressed; we slept a lot.”) lost their media magic. (No hostages, no story, no 24-hour cycle, no slogans, no rhetoric.) Four days after the release the saga was ancient history.

Which cleared the decks for John Kerry and George W. Bush.

It’s a sign of anxious times that political confrontations are sanitized to limit damage and not maximize insight. In that sense, the first Kerry-Bush contest was less a debate than a neutered prizefight where the celebrity contestants are invited to throw punches but avoid contact. Kerry accused Bush of instigating a war to suit his predilections (and oil interests); Bush insisted his war made the world safer.

Kerry, most agreed, was effective and chief-like, slinging platitudes as confidently as the president: “Help is on the way,” “I will hunt down and kill the terrorists,” “I believe that when you know something’s going wrong, you make it right,” and so on.

Bush whined uncharacteristically and seemed burdened by Middle Eastern complexities he truly doesn’t understand or care to. He insisted on Iraq’s desire for freedom (poster talk), spoke of “registered” voters in Afghanistan (something from the movie “Wag the Dog”), and noted that his opponent had changed his position often (by now a hackneyed line). His message to Kerry on Iraq was patriotic and infantile: Don’t knock a war while it’s being fought. Rightly, Kerry didn’t bite.

Boiled down, however, the first debate was less about foreign policy – its ostensible theme – than about the defining and defending of abhorrence.

These terrorists hate us, said Bush, and we must destroy them. These terrorists hate us, Kerry responded, and I can destroy them better than you. This is war and I am fighting the right war, said Bush. This is war, and you are fighting the wrong war, declared Kerry. It was Saddam, said Bush; it is Osama, answered Kerry. I hate the haters, said Bush; I hate the haters better than you, said Kerry. Neither candidate bothered with subtlety.

Let’s be clear: American politics is hardly more erudite than Rome posters. Stakes are high, margin for error minimal. In a culture whose press parses public figures into oblivion, risk-taking is tantamount to folly. Debates have game plans, like NFL football; executing a plan is the measure of success. All else is eccentric.

Knowing this doesn’t make the listening any less unsettling.

Bush and Kerry are lively and bright, though in different ways. Give them an unhindered format, two microphones, and they’d no doubt put on an interesting show. But that’s no longer the point. Early debates reflected a pre-deodorant age in which television’s proud contribution to political discourse was to make contenders palpable and idiosyncratic, with warts. On TV, and under probing, informed questioning, platitude seemed penetrable. Emotions spilled out, so did impulses, eloquence and awkwardness.

But the television of the 1960s and 70s was wry, dry, and largely aloof from self-indulgence. Propaganda television advertised as news (Fox is but one of many culprits) subverts the process. Candidates disdain the provocative, leaving the media to embellish and flavor their texts. Debate “winners” are those who remember lyrics, don’t flub lines, and seem etherized but assured. Not once did Kerry or Bush articulate a global vision independent of waging wars and winning them. Not once did either man acknowledge the existence teeming planet composed largely of non-Americans. Kerry spoke of allies, but he might has well have used the word adjuncts.

Campaign handlers are evidently suspicious of global vision (tedious and idealistic) and worry that intellectual depth will fluster BlackBerry attention spans. They prefer handing over a candidate’s deep-think to surrogates and consulting pros, mostly former government and military officials who earn a living from on-air king-making.

Bill Clinton, early on, was larger than this accepted wisdom. Eager, ambitious and hugely articulate, he avoided cliché. But he was a comet, and a flawed one.

As molded for the United States in the time of Iraq, Kerry and Bush are perfect: the talking sum of their slogans. Kerry might look or sound better one night, Bush on another. But they remain what America apparently wishes them to be: poster boys for a nation at war, arguing, yes, but only over the terms and contract of the rage.