How the wine was won 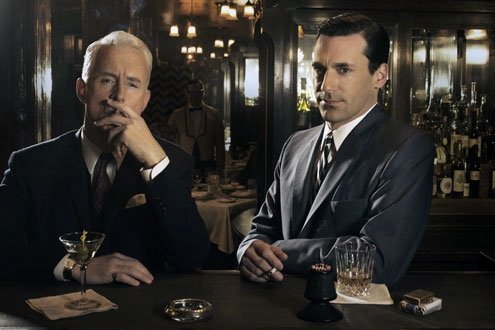 In the United States, it was mixed drinks ahead of wine for three centuries, which the series "Mad Men" made clear.
O

ne episode of “Mad Men” is enough to remind anyone that America’s interest in wine didn’t exist in the 1960s. Curious as to why Americans only recently developed a taste for and an interest in quality “terroir” wines, especially from Italy, I decided to sketch out the country’s erratic wine legacy.

While it’s true that enterprising 17th-century Virginia colonists tried starting East Coast vineyards using European rootstock, they were almost immediately thwarted. In general, the Atlantic climate was inhospitable to grapes. Worse still, an aggressive louse called phylloxera, native to North America, killed what vines they did manage to plant. The aphid attacked the roots of grapevines and also traveled well, eventually making its way across the Atlantic on commercial vessels and cutting a swathe of destruction through most of Europe’s grape crops in the late 19th century.

Aside from the few settlers who could actually afford to have wine imported from Europe — among them Thomas Jefferson, who loved French wine but whose Virginia vineyard was also destroyed by phylloxera — the new arrivals had no access to wine, learning to drink beer and whisky instead.

By the late 1800s, American wine drinking was largely associated with European immigrants, not a group most mainstream Americans particularly sought to emulate. But the real death knell was Prohibition (1917-1933), whose restrictions shut down nascent wineries in California. When Prohibition was lifted, Americans set aside the California start-ups and thirstily returned to their favorite distilled alcohol drinks and beer.

In his 2012 book, “Inventing Wine: A New History of one of the World’s Most Ancient Pleasures ,” wine historian Paul Lukacs argues that the American “wine revolution” really began in the 1970s, when acclaimed Australian Max Schubert began making and selling wine made from Syrah, or Shiraz, turning on end the European concept of “terroir” (a French word for the fundamental importance of place). In a fundamentally different twist, Schubert put grapes ahead of vintners. He harvested grapes over large plots, ensuring annual changes in composition and flavor. This concept of controlling taste by selecting grapes from various vineyards and applying scientific methods to “create” wine in the cellar appealed to his California counterparts, who soon adopted the idea. Gradually, the University of California, Davis became a center for wine research and expertise in the making so-called “modern” wine.

In 1976, with French judges officiating, California wines defeated bottles of French Bordeaux and Burgundy in a blind tasting that became known as “The Judgment of Paris.” Americans were suddenly taken with the idea that they could make and drink “quality wine.”

About that time, Robert Parker, an unknown patent lawyer from a rural Maryland town developed the idea of a point scale to help statistically-oriented Americans grade wine. “Every American knows what 100 means on a third-grade spelling test,” he reasoned, creating what has since become his ubiquitous 100-point scale.

In 1982, Parker gave high scores to Bordeaux wines, insisting the year was among the best vintages ever. He was right. Americans suddenly believed they could buy French wine with confidence. Parker’s point system, though skewed toward an American preference for bold, fruit-forward wines, was the precursor to many similar ratings and reduced consumer fears of buying the “wrong” wine because they didn’t understand the labels.

Another key moment came in 1991, when the U.S. news show “60 Minutes” aired a segment titled “The French Paradox” in which correspondent Morley Safer asked experts how it was possible that the French, though eating a fattier diet, seemed less prone than Americans to heart attacks. The answer, the show claimed, was a chemical compound found in red wine known as resveratrol. The program concluded that drinking red wine could actually improve human health. (Later studies have questioned the finding.)

At least as interesting is my sense, albeit casual, that Americans are increasingly drinking Italian “terroir” wines, non-modern ones often made with native grapes closely tied to place and people. These are wines that haven’t been tinkered with in the cellar or been subject to commonplace scientific methods. They have their own variable personality and don’t follow the standard formula of bold, fruity flavored reds and oaky whites.

I just came back from a trip the United States in which I found a surprising number of artisanal, “terroir” wines in both shops and on restaurant menus. Here are a few summer reds with their average winestore price in Europe.

— Azienda Agricola COS “Pithos Rosso” IGT Terre Siciliane 2011 (€20). Ideal for grilling, this blend of 60 percent Nero D’Avola and 40 percent Frappato grapes is produced bio-dynamically and fermented in clay amphorae. You can drink it now or let it age five to seven years.

— Montevertine “Pian del Ciampolo” IGT Toscana 2008 (€25) A medium-weight wine that is superb with past or grilled meat, Montevertine is made mostly from Sangiovese (a special clone known as Sangioveto). The right time for the vintage is five to seven years later, which makes this 2008 perfect.