How Starbucks Saved My Life: A Son of Privilege Learns to Live Like Everyone Else 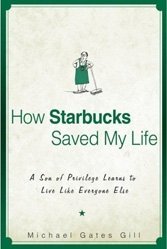 It is no surprise that Tom Hanks would agree to star in the movie. A true story, Gill’s story has all the ingredients of a Preston Sturges or Steven Spielberg film. New York is knocked off its pedestal. Hard work, humility and a sense of humor redeem a man and reveal the shallowness of his class assumptions.

Gill begins as a New Yorker cartoon caricature: Not surprising, since his father Brendan Gill produced such cartoons for decades. Gill wears good suits, lusts for Lobb shoes, has a penchant for summers on lakes and the Upper East side. His inter-racial interaction is limited to domestic help.

But post 1980s business practices, hard-headed female MBAs and middle-aged sexual confusion rip up the bliss. Fired from his lifelong career at a traditional Madison Avenue ad agency, diagnosed with a brain tumor, and with an out-of-wedlock son on the way, Gill whimsically applies for job at a Starbucks on Broadway. The prospect of health insurance, a pay check, and a way to fill empty days transform the whim into a plea. Soon, Gill is hanging by the telephone.

He gets the job and soon a man who once squired Jackie Kennedy is proud clean toilets. His awe at the contrast between the Starbucks’ New Age and his Fortune 500 history are reminiscences of life with father — the days of pelting Ezra Pound with apples, drinking with Hemingway in Pamplona (they were introduced by novelist Janet Flanner). At times the “Gee whiz, look where I am” tone wears a bit.

But it still had this hardened expatriate misty-eyed. Where else but America does work redeem you? Where else would a Skull and Bones aristocrat feel obliged to listen to, learn from and respect a female, African-American boss whose drug-addict mother overdosed when she was 12, leaving her in the projects with an aunt who calls whites “the enemy”? Where else would the latter have given a chance to the former? Required reading for those who quote F. Scott Fitzgerald on second acts in American lives ,and for Europeans who insist America is too racist to select, let alone elect, Barack Obama.