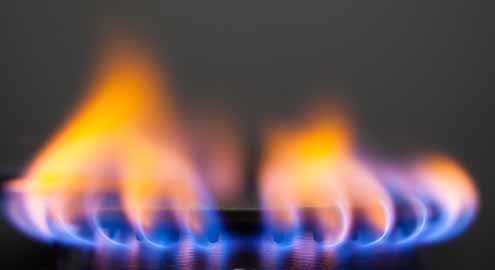 Gas heat is a delight, so stay away from that dial.
I

’ve never been great in autumn. Whatever modicum of motivation I have to go to work in anything but sweatpants fizzles out. I like to think it’s because I’m part bear. In reality, I’m part tight ass. I’m too cheap to turn on our heater until well after Thanksgiving — and I mean well after Thanksgiving since I’m not 100 percent sure when that is. Don’t roll your eyes at me. I only pretend to be American so that I can get published.

When I finally do decide to turn on the heater, it’s only under the strictest rules. No more than 17 degrees (that’s less than 63 for you Farenheiters) for no more than three hours a day — one hour in the morning when we wake up and two in the evening when we return from work. Don’t even try turning that dial up above 17. That’s how my husband lost his first three fingers.

In such harsh living conditions, an extra jumper is not enough. You must be warmed by your pride. When anyone visits and remarks on the cold, I throw them a withering stare and say, “Oh really? I hadn’t noticed” before rolling up the sleeves of my sweater. I’m tempted to take off my socks and shoes, but the early onset of frostbite doesn’t exactly give me credibility. Jokes aside, I actually do suffer from chilblains and the itching keeps me up at night.

I could pretend that my affinity for the cold is a silent protest against the fossil fuel industry and my unfortunate husband is simply collateral damage in my earnest desire to do good, but my office is a slightly extreme 30C from the beginning of September until mid-March.

Whaaaat? You splutter. It’s elementary (read hypocrisy), my dear Watson… s. My father-in-law pays for the gas that runs my office heater. I pay for the ridiculous cow farts that fuel my radiators at home. Seriously, they run on methane — who uses methane?

I said at the beginning of this column that I was part tight ass, but I’m actually more like full tight ass. In my case, it was neither nature nor nurture. My brother spent two grand on a puppy last week and my sister’s already spent her inheritance — never mind that my mother’s still alive. As for the latter, she once almost threw out a defective flat screen TV because she was too lazy to lift it up and see if the warranty was underneath.

I have always been frugal. While my siblings were actively trying to bring about the end of the world’s natural resources, I would stay awake waiting for everyone to go to bed so I could quietly tip toe into the living room and turn off the heater.

I was so fixated with turning off lights, that I once turned them off while my mum was still coming down the stairs. She tripped, fell and in her last lunge, lobbed a few choice expletives in my direction.

To be frank, I don’t really care all that much about the environment. I’m Generation Y. In other words, selfish and foolish enough to think I’ll be long dead before climate change gets me.

For me, it’s always been about the money. I can’t bear the thought of spending it on something like heating… or name brand cereal or a restaurant dinner. As a kid, I always ordered the cheapest thing on the menu and then pretended that’s what I wanted anyway while my siblings called me all manner of variations for tight ass. They knew so many of them and I ate so many pizzas with nothing but a handful of mushrooms.

When I collect enough coupons to get a free session with a psychologist, I already know what he or she (let’s not discriminate) will tell me. The root of my tight ass behavior is guilt. I grew up in a single parent household and I felt guilty about spending the money my mother earned. We weren’t wealthy, but we certainly weren’t poor and my siblings most certainly didn’t suffer from the same guilt.

Somewhere along the line, that guilt morphed it extreme tight ass-ness. If ever win the lottery, I’m sure I won’t spend it. I’ll squirrel it away inside of one my walls. I’m not telling you which one. Keep your filthy paws off my fictitious zillions.

The fact that I don’t feel guilty about spending my parents-in-law’s money probably goes a long way to showing how horrible a person I am, but I see it as reparations. Reparations for having to smile as my mother-in-law tells me for the nth time to stop giving my 40-year-old husband cucumbers because he doesn’t like them or for not-so-subtlety suggesting that my dress sense is atrocious or for whining incessantly about her fictitious ailments so that she is always center of attention.

If the first step is admitting your have a problem, then I am well on my way to the next step, fixing it. Let’s just pray we don’t freeze to death before that happens.