How green was my valley 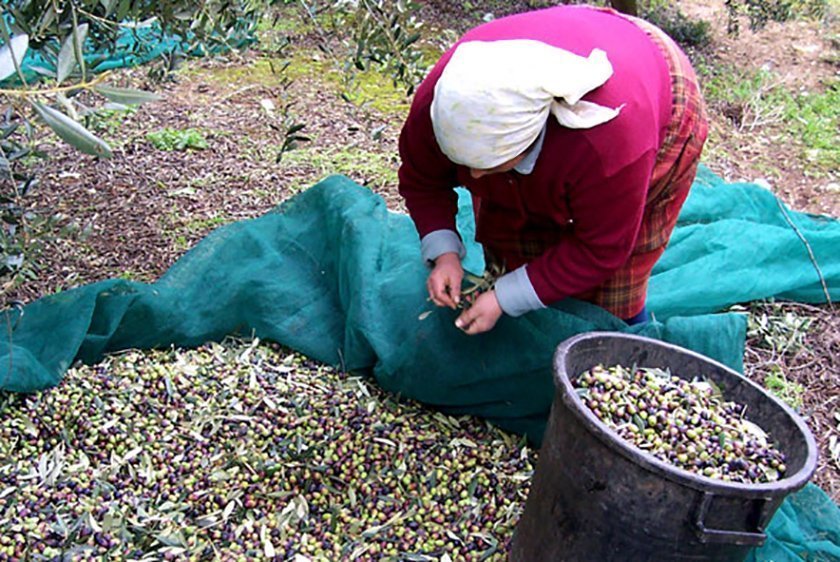 Picking up olives from parachutes, in Salento. Author photos.
T

his is a cautionary tale, though it may not seem like one at first. In fact, at first it will be a tale about beauty. In that vein, travelers to Salento, located in the deep southern reaches of Italy, in Apulia, have always remarked at the abundance of olive groves that can seem all at once like the region’s welcoming carpet. Many of the olive trees are centuries old, with grandfather trees dating back a thousand years, old enough to have seen William the Conqueror, had he ventured south. Their gray-green leafy branches extend cooling shadows under which peasants working in the scorching heat of summer sought relief, wayfarers as well. Sunbeams filter through the thick and windblown foliage, playing tricks with the light. It’s a dreamy atmosphere, one Claude Monet would surely have appreciated. 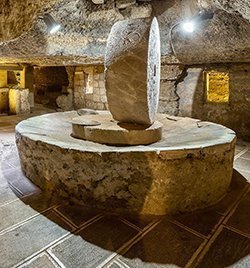 An underground olive mill in Gallipoli.

A bird’s eye view of the Salentine peninsula would show a place in the full thrall of olives, with small villages scattered here and there. But unless you’re elevated, atop the serre — chains of low lying hills that run across the heel of Italy — this landscape will not seem so extensive. Country byways are sometimes so narrow you can easily get lost, since the trees themselves hamper vision and obscure points of reference. Only from hillock ridges can you enjoy the ocean of olive crowns. White farmhouses and pagghiari, the trullo-like dry-stone structures, dots the green expanse that stretches into the glimmering sea in the distance.

Olives gradually replaced the original forests of ilex and maquis, the evergreen shrubbery predominant in pre-Roman Salento. The indigenous peoples, and from the 9th century BC the newly arrived Messapians (a blending of populations from today’s Albania, Montenegro, and Crete), already cultivated these lands. After the Roman conquest, increasingly larger portions of wild woods were cleared and planted with olives and grape vines.

By the end of Middle Ages, the wooded areas were reduced to relicts.

Olive cultivation methods remained unchanged until well into the 1950s. The selection of varieties resulted in trees that didn’t need watering, the annual rainfall sufficient to ensure a more than generous harvest. Until the end of the 18th century, Salentine olive oil was produced in underground olive presses (frantoi ipogei) and used almost exclusively for illumination. This oil, too acidic for food, was exported throughout Europe in barrels.

Vessels that set off from Gallipoli, the area’s main port, carried this precious golden liquid as far as England, France, Norway, and Russia. The advent of modern presses gradually improved the quality of the oil, allowing it to achieve top-flight status. Salento’s Extra Virgin Olive Oil is now vital to the region’s economy. It is also considered a prized and indispensable piece of the Mediterranean diet.

Today, olives are mechanically harvested and immediately processed. By early December, the harvest has already ended. But until a few decades ago, cycling along country lanes, I could see dozens of women in the fields well into January, clad in long dark dresses, always wearing a headscarf, picking olives one by one from the ground under the trees, filling baskets. They would empty them into large containers set on horse-drawn carts. More recently, the carts were replaced by three-wheeled scooters or pickup trucks, always at the ready at the edge of fields.

I happened to see World War II-era parachutes being ingeniously reused for the gathering. Most had been discarded by U.S. airmen after jumping to safety. The peasants would place these recovered parachutes under trees during the harvest season, making it easier to pick up the olives when they were shaken down, a process that now involves modern mesh nets.

Now it is time for my story to change its tone, for the whole of this green past is in jeopardy, and has been for some time.

Long before the coronavirus onslaught against humans, a mysterious plant disease began assaulting olive trees throughout the region. The year was 2013, and since then olive trees have been withering and dying in ways that have transformed the green I so love. The disease that struck the olive trees is bacterial (Xylella fastidiosa, first noted in 1986) and had already wrought havoc with South American crops, citrus and coffee included. In Florida and California, it had decimated orchards and grape vines. Italy imported tropical plants from South America, probably allowing the malady to make its transatlantic leap.

Long before the coronavirus onslaught against humans, a mysterious plant disease began assaulting olive trees throughout the region.

Badly hit were Salento’s Ogliarola olive trees, known for their ancient, twisted trunks. Soon, vast areas of rural countryside were stricken, trees made to look like small dark skeletons, their branches hopelessly stretched out, as if reaching out for help from heaven.

After remedies were tried and failed, a national plan was devised which called for the eradication of the sick trees, and those immediately around them, to help stem the spread of the disease. But farmer and self-appointed environmentalists (and conspiracy theorists) stood vehemently in the way. Spray-paint signs appeared: “Xylella is a fraud” and “Hands off our historical heritage.”

So far, the sickness has destroyed some 50,000 hectares (around 123,500 acres) of olive groves, an estimated 5 million trees. Unchecked, the disease spread to northern Italy, infecting various crops, soon migrating to other parts of Europe. A foretold disaster. The European Union referred Italy to the European Court of Justice for failing to take the necessary measures to eradicate the infection and prevent its spread. That same court convicted Italy.

In 2018, a response took root. Salento farmers, using state and EU funds, began to eradicate the dead olive trees and plant new varieties that are resistant to the bacteria. Some 800,000 new plants have already been bedded. It will of course take time for farmers to recover lost revenue, but it’s a start, and opposition has all but ceased.

I can now genuinely hope to live long enough to see my valley return to the resplendent green color it holds in my memory.