How deep the leak? 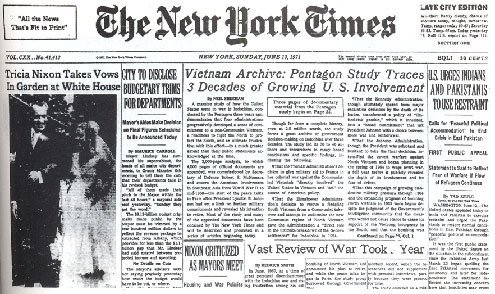 or a decade, Italian Prime Minister Silvio Berlusconi has been compared to Russia’s Vladimir Putin. Both are vain and covet media control. Both imagine themselves as personality-cult icons. Their resemblance is not new, nor is it news.

For decades, China has fretted over North Korea and its caprices. The countries have a morbid history that money-wise China no longer respects as useful. Beijing’s disdain for North Korean self-indulgence is not new, nor is it news.

For the duration of the Afghan and Iraq wars, Persian Gulf States have acted as opportunistic go-betweens for tainted cash, both in support of and against terrorism. Emirates duplicity is not new, nor is it news.

These are only three examples of so-called “revelations” among some 250,000 private cables written mostly by middle-level America diplomats and circulated by WikiLeaks, the global clearing house for the paperless world’s pillaged communications.

The striking aspect of the “secret” cables is not their contents — little is damning per se — but what their release says about the growing global appetite for almost any kind of gossip, often unsourced, particularly if impregnated with the aroma of betrayal.

Unlike the Pentagon Papers, a clinically critical insider view of the Vietnam War’s shortcomings leaked to The New York Times in 1971, the WikiLeaks snippets are by turn catty, clever and trite. They sum up no one diplomacy policy. They evidence no one evil or dastardliness. They are instead the locked door ejaculations that modern states have long encouraged diplomats to submit while studiously attempting to keep them under wraps, lest they rattle sensibilities.

The leaks predictably contained prurient personal details. Libyan Col. Muammar el-Qaddafi allegedly enjoyed the company of a Ukrainian nurse described in a cable as a “voluptuous blonde.” Putin-appointee and Chechnya chief Ramzan Kadyrov was a portrayed as a cross between a 007 villain and a character from Arabian Nights, a man with absurd spending habits and a penchant for moonlight ski-jet jaunts on the Caspian Sea.

Leaks are undeniably both precious and pernicious in a post-ideological era that imbues gossip with immediate seismic importance. They reward those who farm them indiscriminately, sometimes making them up for cash or sport. By contrast, diplomatic whispers are leftovers from an us-vs.-them past in which those in the know were encouraged to write off-the-cuff assessments of their surroundings to assist desk-bound bureaucrats form a more complete and psychologically flavorful picture of day-to-day life in outlying nations. The principle reason for muting the indiscretions was the risk of exaggeration or inaccuracy.

WikiLeaks has changed the rules for keeps. It’s the product of a society that relies on fantastic talk-and-see tools to counteract boredom and entertain so-called news junkies. Since what is private is by definition hidden, and discretion an adjunct of withholding, burrowing into the concealed is now considered a valid enterprise, a vanquishing accomplishment. Like hacking. Or an anonymous posting that is vicious but purports to tell the truth. The act generally exists outside consequence, which intensifies its allure. Little juridical precedent exists in what remain the badlands of law

Revealing the hidden also helps generate so-called infotainment, a category of news that teasingly informs and entertains, using the latter to rationalize any failings in the former. Freed from fears of world war, the early 21st-century world has rediscovered some the circus brashness that gave the late 19th-century its Yellow Journalism luster.

Newspapers and corresponding online outlets that agreed to publish the WikiLeaks “dossier” cited press freedom and public responsibility to defend themselves. Government denunciations inflated the theatrics. As did chatter regarding the sexual character of the WikiLeaks founder. The many-nation howl soon surpassed the revelations themselves as the main attraction, not hard since the most of the cables lacked bite. Many of the leaders mentioned most prominently, including Qaddafi, Berlusconi, Putin, Afghanistan’s Hamid Karzai, Venezuela’s Hugo Chavez, Zimbabwe’s Robert Mugabe, and Nicolas Sarkozy of France, are mischievously bigheaded and crave any kind of attention.

But WikiLeaks biggest blow may be to investigative journalism. Nimble news organizations once inclined to invest time, cash, and talent to get to the nitty-gritty rarely inserted into cables or emails are now more than ever dependent on purloined messages for breaking news. Leaks that once supplemented reporting now risk replacing it. Infotainment and blogging are handier than organized digging. They’re also cheaper.

Online acolytes of the secrets-busting process who claim kinship with the groundbreaking Watergate investigation instead appropriate a journalistic lineage to which they’re unrelated. The hardcore details that brought down President Richard Nixon took more than two years to compile and vet. Despite enduring enmity between the liberal Washington Post and Nixon (perhaps because of it), the newspaper intervened to limit the gratuitous or the glib to better monitor balance and restraint, a leaden sequence of events that would have little meaning in today’s instant media climate. The slow “leaks” coaxed into the open by Robert Woodward and Carl Bernstein were largely of their own gumshoe making.

Though WikiLeaks is clearly quite serious about the compiling of pilfered material, it still measures its success based on public reception. With discretion irrelevant, stolen gossip is fitted with a Robin Hood ribbon and shipped out when ready. Honor among thieves is considered procedurally rational, even moral. Whether it’s ethical is another matter.

Yet there’s a deeper and potentially more troubling dilemma. If discretion ceases to exist, secrets lose their coated status, muting if not extinguishing diplomatic cries and whispers.

The founders of WikiLeaks respond that they seek only the truth. They point out that in the bi-polar, non-virtual world of two decades ago, when the United States and the Soviet Union vied for power and vigorously protected information, vital truths remained concealed. Betraying even minor confidences was once cause for capital punishment.

A more casual world simply can’t esteem the values of such a time. The centrality of privacy is seen only as repressive. Security is now perceived as physical, not intellectual. The sinister hide. The honest do not. It’s a non-nuanced view of a planet without creases. It also reflects a hankering for big events, even at the risk of failing to distinguish between the important, the marginal and the irrelevant. Cold War chilled out, the availability of data and transparency are made to stand for a values system, which they’re not.

In a nerve-wracking rumination on the rise of Nazi power, Dutch novelist Hans Keilson portrayed a group of apparently innocuous German youths who had casually taken to desecrating Jewish graves. Of their easily-swayed randomness, he wrote: “When they thought it was a good thing to be cruel, they were cruel, and when they could be kind, they were kind. But now they had been told that it was a good thing to be hard and cruel, cruelty had been presented to them as something just and noble, and they behaved accordingly.”

What the leak-jolted 21st century would do well to look out for is a more sly kind of authoritarianism, one in which impressionable listeners take cues from “true” gossip and tune out the rest.