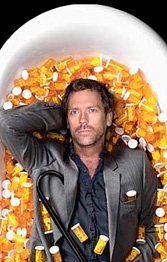 Who is Gregory House?

He’s a very American television character played convincingly by the British actor Hugh Laurie. The gifted Laurie is the maladjusted lead in the Fox series House, M.D., known in Italy as “Doctor House.”

In no particular order, TV’s House is sarcastic, rude, vain, brilliant, terrified of intimacy, physically challenged (he’s gimpy and has a cane), and the bane of men and women who work around him at a Princeton, New Jersey teaching hospital. Women colleagues adore him for his bitchy disengagement from what anyone might think of his methods and manners.

He’s a shopworn American archetype: the once-brokenhearted, now damaged-goods loner. In his (tasteful) apartment, he plays piano, listens to rock (The Who) or jazz (Monk), cruising friendlessly through a controlled existence he’s written off as having little or no significance outside the moment. (The ultimate caring is negation.)

When “Donna Moderna” hired pollsters SWG to interview 500 men and women between 18 and 64, 81 percent of women said House was their dream guy. About 40 percent of the men said they wanted to be like him “because women like tough guys.” Another 25 percent said they thought they were already like him.

Mostly because the women who manufacture Italian men — Italian society is a shrewd matriarchy — instill their sons with a dependence that represses the irritated, cut-loose self-reliance that a House-style archetype burns for fuel.

Laurie’s character functions outside dependencies that Italian men can’t escape, including a fear of being alone or out of contact with a family member willing to listen to grousing — hence the explosive success of mobile communication, which institutionalizes real-time grousing among men and women alike.

Italy’s love affair with House is absorbing for what it suggests about Italy’s male-female divide.

Women House-lovers embrace a brilliant, paternal sourpuss who sneers at convention and is hard to get (read impossible to love, or be loved).

Male House-lovers applaud a nasty and sarcastic crank that thinks he’s always right, dismisses women as vaguely inferior, and deserves love (read sex) because he looks like he doesn’t care.

The problem with transferring the House model to the claustraphobic Latin world is that the self-reliance it portrays doesn’t exist. House lives self-indulgently for his work and goes home to a modest apartment. This is Jimmy Dean and Steve McQueen territory, the misunderstood but driven loner at an Edward Hopper counter. It’s melancholy Americana redeemed through on-the-job existentialism.

Work makes House dynamic and desirable. Professionalism, arrived at curiously, outrageously, outweighs the demands of social convention. His instincts — the sexy ones — emerge from procedure. He works overtime. Ungrateful and generous at once, job is mother to the man. Not woman, not family — job. The scared and sacred loner is intimate only with problem-solving, and that, from a distance, is morally intriguing.

But it’s not real. Nor is House, who’s just a well-acted script with limbs.

The rub is that the paternally ambiguous man that Italian women pine for in House is one they strive to avoid generating in flesh. He’s anathema enough to exist in an emotionally vacuum, which also means he’s capable of walking away from blood ties and repudiating the magnetism of maternal obligations. He’s a latter-day Clark Gable who doesn’t give a damn until he does.

Italy is an involving country in that it loves denying its fundamental craving for every aspect of cramped family drama. It also loves to love the rebel-without-a-cause disengagement in others so long as it doesn’t have to reckon with their personal aloofness close up. Few countries have a population whose members, male and female, are so deeply unsettled by being quiet or alone. They vicariously equate loner status with risky non-conformity. You don’t have to live it, but you can watch it.

House is its emblem. He’s an action hero in a place of loud but elfin dissenters, of complainers without bite. He’s a hero to those who think they like tough guys and tough love but can’t be truly alone without sensing the self-conscious onset of a deeper and broader abandonment. He’s a man’s man to women who once they become mothers often retard the growth of their boys lest the men who emerge turn detached, snarl, or shirk their maternal debt. He’s also a woman’s man because it’s assumed the right love can “fix” him.

For his many Italian fans, House is the exotic beast who isn’t theirs, a sort of fantastic speculation that paces and preens untamed in his American cage, a celluloid model for the culture-busting possibilities of foreignness.