House of Versace: The Untold Story of Genius, Murder, and Survival 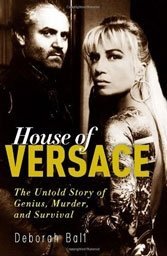 hough Amazon promotes Deborah Ball’s “House of Versace: The Untold Story of Genius, Murder, and Survival” under true crime and fashion writing, the categories of family saga and popular culture might better suit the more fascinating — and surprising — parts of this smoothly written book.

Wall Street Journal writer Ball fleshes out the brilliant and short life of Gianni Versace and his family, particularly his sister Donatella. Her narrative of the Versace family’s life in provincial 1960s Reggio-Calabria is highly visual. Portrayals of Gianni’s mother’s atelier, his timidity and then more obvious homosexuality, and his move to 1970s Milan, might fit into a film by Antonioni or Visconti. Ball balances the flamboyant circle of Gianni and Donatella with the more sober and business-like one represented by their father and their brother Santo. The family saga plays out with transformation of the Italian economy and the Milan fashion world as a backdrop.

Few recognize how much the fashion industry owes to the Versace vision. They developed the idea of runway super-models and promoted red carpet events that were spiced up by celebrities. But the lavishness came at a cost. Gianni Versace was murdered in Miami in 1997. Donatella fell apart. Financial woes and inheritance entanglements plagued the family for years.

Ball had unusual access to the Versace family, developing personal relationships that help give insight into the family’s private sphere. We meet suffering Allegra, the hapless heir to personal and financial baggage she may have neither deserved nor wanted. The glamour of celebrity doesn’t blind Ball to the human side of the book’s characters, nor does it make her cynical about the human frailty behind the glittering façade.