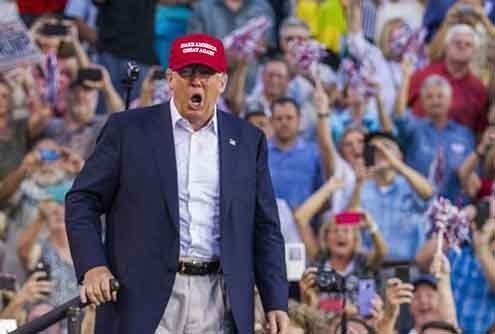 Donald Trump is still campaigning.
A

sk a hyperbolic and self-interested businessman to weigh in on an acrimonious racial dispute and he’ll invariably support the loyal shareholders who vouched for his seat at the table. Admittedly, such hardheadedness isn’t usually associated with the U.S. presidency, an office long tethered to a moral gyroscope with a long if imperfect history of maintaining the country’s inner ethics. Deference to a broader notion of national good has caused many presidents to put balance ahead of their preferred ideologies.

Enter Donald Trump, a new breed of president. His interest in the national equilibrium and politics at large appears limited to how he’s judged by cable news pundits and the near-paranoid grudges that criticism against him produces. He loves and depends on sycophants (a common celebrity trait). He sacrifices bishops to mood shifts (Steve Bannon the latest victim). He is unapologetically incapable of weighing his words.

Trump’s stubborn and furious refusal to blame white supremacists for inciting a Virginia protest that eventually led to lethal violence – concocting a vision of “collegial” warfare instead — was the latest example of his gyroscope-free presidency.

It should surprise precisely no one.

Time and again Trump has spoken of missing the tympanic ruckus of the campaign trail. He’s even returned to Midwest states he won to hold ego-buoying rallies. He still revels in raucous sounds of the angry folk that put him in office, those betrayed by an Obama Administration seemingly oblivious to the nonurban recession alongside those dolled up in ultra-nationalist war paint determined to portray Obama and Hillary Clinton as treasonous figures who surrendered America’s economic and military manifest destiny. They wanted Washington’s slate wiped clean.

Central to Trump’s success was his amoral embrace of fringe supporters gyroscope-driven candidates refused to touch. He egged on those who expressed conspiratorial disdain for Muslims, blacks, Hispanics, Jews and hated the welfare wimp creators of affordable health care. America First came to mean vulgarity and crudeness first, both words portrayed as tools used by elitist, “liberal” media to subvert loud free speech. To his presidential mission, Trump brought a history of rancor toward federal monitoring and a craving for the limelight.

Most saw his nuance-defying run as a self-indulgent folly destined to end badly. In fact, the uglier the tone of his rallies, the more his scoffers took pains to repeat the word “unelectable.” From the analytic safety of their big city nests, they insisted the only “real” news was that his Hell’s Angels vaudeville act couldn’t possibly pass national muster.

Any wonder Trump had the “fake news” bromide primed when the impossible came true? Any wonder liberal doubters of his presidential fitness were and are still labeled losers, traitors, do-nothing congressional serfs or pansies? Any surprise Confederate monuments now look prettier than ever?

Driving without breaks, Trump blended grassroots populism with the pent-up fury of those eager to make the battle for the presidency into a full-throttle showdown pitting the elite of the Athenian metropolis (and its longtime treacherous mistress) against an at-large Spartan hinterland itching to make a bigger name for its hardcore mistrust of politicians. Comparisons to Richard Nixon are specious because Nixon, bad at being a blowhard, adored political gamesmanship, so long as he could manipulate the rules at will.

Now, as Trump lords over his spoils, still foraging for the praise and glorification the coasts will always deny him, he takes solace in his grimy rally corps. The angry boys of Charlottesville — though he’d probably never let them close to Trump Tower — are his defiant ones. They’re evidence of the “locked and loaded” truculence built into a man who struggles to speak lucid English. True to their word, the angry ones voted for him, and he continues to see their repudiation of the established order as a catchall vote of confidence.

Unburdened by the weight of old school conscience, he’s unlikely to ever deride these enemies of his enemies. Part of the new American “greatness” is to let resentment loose, putting political correctness to rest. The backbone of this vantage point is blood-brother loyalty, which — witness TV’s “House of Cards” — puts the fair and the odious in the same pen and lets them have at it.