House of the heart, III 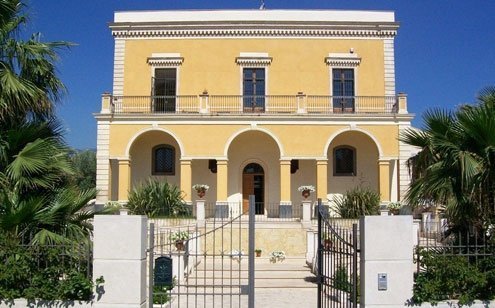 In purchasing a villa in Italy, like this one in Sicily, a trust might come in handy.
E

ditor’s note: this is the final column in a three-part series. The first two covered the legal ins and outs of preserving a family vacation home in the United States.

Walter finished writing a letter to his sister and read it over: “Dear June: My four daughters and I have decided to establish a Delaware limited liability company (LLC) to hold title to our island house in Maine so we can keep it in the family for future generations. Since you’re now buying a place in Italy I thought you’d like to know. You will have your own rowdy clan to think of. Good luck with that, Walter.”

June, who lives in Manhattan, had long dreamed of buying a villa in Italy with her husband Max. After getting Walter’s note, she took the LLC idea to her high-priced New York lawyer. Turns out he was a step ahead.

The lawyer told June he routinely helped American clients purchase foreign real estate using U.S.-based LLCs, and that he’d gladly create one for June. The LLC, he explained, was a useful way to own real estate because personal liability was limited to the value of the underlying property, thus protecting any other personal assets. An operating agreement would allow for any and all home management decisions.

June liked what she heard and pressed ahead. It took only a week to incorporate the Delaware limited liability company named J&M, LLC. The next step was buying the villa, and her lawyer enlisted Alessandro, a Rome-based Italian attorney, to assist.

Alessandro took one look at the LLC and immediately knew what he had to say: shut it down. Italian tax authorities penalize companies formed for non-productive reasons. The LLC, though lacking any income from the villa, would nonetheless be attributed a high annual minimum income that would then be heavily taxed. Moreover, the LLC would need to establish a branch in Italy, maintain special accounting records, and appoint a “fiscal representative” to answer for the company’s tax liabilities.

Alessandro saw these as pointless additional expenses. Instead, he recommended that June buy the villa in her own name and purchase insurance to cover inherent ownership risks.

But June, like Walter, was determined to ensure the new property remained in her family — the reason Walter’s family had made its LLC choice.

“Is there a way to do that in Italy?” she asked Alessandro.

“There is,” he replied, “but it’s not widely known or understood, and it is not the usual ‘Italian’ solution.”

Once, Alessandro explained, Italians bought property through a personal company known as a societá in accomandita semplice (sas), which helped them around estate taxes on the appreciation of a property’s value. But estate taxes for individuals recently dropped to exceedingly low levels. Now, those still holding real estate through a company and seeking to sell faced exorbitant capital gains taxes.

While the company structure could still be used to ensure real estate remained family-owned, it had become a treacherous method in financial and administrative terms.

Traditionally, when an Italian property owner dies (frequently without a will), the property passes to his or her legal heirs — surviving spouse and children. They hold the property in comunione, a form of tenancy in common. The co-owners can enter into a written agreement to preserve that legal status and also circumscribe the substantive rights between them (which will also apply to their heirs). But such an agreement can last only 10 years.

Moreover, each co-owner has the right to request the dissolving of the comunione at any time and insist that the property be divided.

Another way to keep real property in the family, one often used in the context of family businesses, is through a so-called impresa familiare (family business), in which one family member takes on the role of imprenditore (entrepreneur) while the others participate in running the business. It maintains family control over property but also has a durational caveat: it ceases to exist upon the death, bankruptcy or withdrawal of the imprenditore.

So what did Alessandro recommend, June asked.

Trusts are familiar to few in Italy because Italian law doesn’t provide for them. But Italian law does recognize legal trusts formed in other countries, with trusts created to hold Italian real estate necessarily governed by non-Italian law.

“So,” said Alessandro, “you could create a trust under New York law to own the villa and set terms for its use. This solution would keep the villa in the family. In fact, added Alessandro, it is also a solution that Italians who hold property in Italy can freely adopt.

But one thing still perplexed her. “Why,” she asked Alessandro, “are trusts not used more often in Italy?”

The Rome lawyer’s reply seemed to contain a wry smile: “Because ‘trust’ is not something that Italians do.”