House of the heart, I 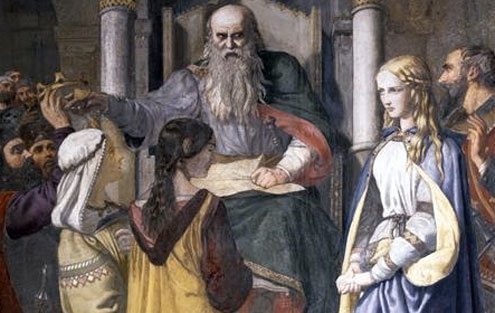 The story of Lear and his daughters has modern-day resonance.
A

ugust ended and Walter again returned to Vermont from his island house in Maine with warm memories of the time spent there with his four daughters and their families. His clan treasured the house and the rocky seacoast where it perched. The island summers they had shared made them grateful to Walter, notwithstanding his increasingly unexpected outbursts of anger.

Once a seaman, Walter had an Englishman’s blood and his temper switch was permanently set to “on.” Advancing age had made him ornery and little spiked his blood pressure more than his damn son-in-law lawyer putting his “oar in” about the ways Walter could legally transfer the island home to his heirs. The thing that most annoyed Walter was that he knew the cursed lawyer was right.

Walter was a man of common sense who did his utmost to avoid complications. He had bought the island home six decades ago for $13,000, a lot of money in its day, and borrowed to do so. Having a mortgage was as deep as he wanted to go with banks and the law. Now, he wanted only to get the property out of his name and into the legal hands of his grown daughters while he still could.

Though Walter had lived his life on the water and leaned toward simple solutions, he knew his Shakespeare. The story of King Lear haunted him, and he secretly thanked the Bard for teaching Lear’s tragic lesson.

He also knew he had one up on Lear. Walter’s daughters were closely knit, unlike Lear’s Goneril and Regan, who were both poised to cut the king from their lives the moment the kingdom was divided between them. They were ready to kill each other if need be.

Walter also understood that the size of his kingdom meant nothing if fate intervened. If he simply gave the home to his daughters, as Lear had done with his kingdom, control would be lost. Title to the property could be quickly torn asunder.

Whether through marriage, gift, sale or death, he was fully aware his family’s beloved port of choice could be ruined. With nine grandchildren it was Walter’s dream to have them and future generations enjoy the house. While he knew family conflicts were inevitable, he nonetheless resolved to avoid them and not allow his stubbornness and pride to ruin him as it had Lear.

Laws governing ownership play a critical role in decision-making as it pertains to property. In the United States, state laws govern real property ownership, including its transfer, whether by sale, gift or inheritance. Though Walter resided in Vermont, the laws of Maine governed his choices, since the island home was in that state.

Under Maine law, if Walter chose to make the island home a gift to his daughters, they would hold the property as “tenants in common,” a form of ownership in which each tenant (i.e. owner) holds an undivided interest in the property. There is unity of possession but separate and distinct titles. This would mean that all four of his daughters would be entitled to equal use and possession of the entire property. But there are risks:

Walter knew his daughters’ personalities well, and knew that before going ahead with a transfer he should talk to all of them about their preferences regarding the use and ownership of the house. He even heard out his damn lawyer son-in-law.

Each alternative had its pros and cons, with set-up costs, gift taxes and flexibility in making future modifications as necessary considerations.

But the discussion was the first step, so father and daughters sat down. And the process began.

— House of the heart, II will cover details of property ownership in the U.S. and Italy, vacation home management agreements, and, of course, the outcome of the discussions.