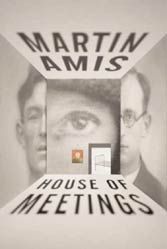 Since “Koba the Dread, “ his mea colpa elegy to Stalinism’s marathon horrors, Amis has favored “Gulagism” from among contemporary leprosies. He’s the self-anointed carrier of the memory of the Soviet-era trampled. Due respect to Solzhenitsyn and his kind, Amis seems to say, but I can recollect as well or better; I can make it relevant. Amis toils so diligently at being Russian and imperiled that you want to say, “OK, OK, Martin, from now on you’re Martin Martinovich, survivor…” But no such title exists.

This is a labor camp novella pawned off as an extended letter to an American step-daughter (Venus) who (necessarily to make the overall indictment work) has a chin piercing and knows nothing of history or ideology, an Amisonian nod to post-modern dissoluteness. The central narrative, with a love-story tangent, is about two brothers in a postwar Stalinist labor camp, terrain that Amis prowls meticulously for high prose and physical, sexual felonies. But the central conceit is another: “nightmare country” Russia, unlike Germany, cannot confess its mortal sins. “The conscience, I suspect, is a vital organ,” says his unnamed narrator. “And when it goes, you go.”

Desperate to confess his middle aging self, Amis attempts the impossible; he sublets the eloquent degradation of a Soviet rapist and slave. It’s never banal, and that, oddly, forces the gravitas. Applaud Amis for trying so hard. But it’s too hard, in fact — and that’s a burdening outcome for fiction that seeks so desperately get past irony in search of sincerity.