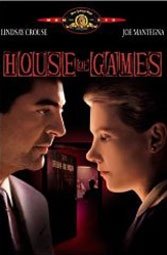 Margaret Ford (Lindsey Crouse) is a successful psychiatrist and the author of a best-selling book called “Driven: Obsession and Compulsion in Every Day Life.” She’s a workaholic whose writing and no-exit therapy sessions leave her sexually and intellectually joyless. When a patient threatens to kill himself over a gambling debt, Ford decides to intervene. This leads her to the House of Cards, a big-city con man salon orchestrated by Mike (Joe Mantegna).

Mamet’s first feature is a cat-and-mouse tale of deceit and betrayal that seems to give itself away early on. After all, the passion-starved doctor seems ripe for the con-man picking. But Mamet’s downward story is so adroitly stylized, so lean, undistracted and smoky, that it doesn’t matter if you can guess where he’s taking you. The entanglements of conspiracy are so stylish and the noir-bent interaction between “square-jawed blonde” Crouse and “bad boy” Mantegna so… right… that nothing much else matters.

Once Mamet has amoral obsession by the tail he doesn’t let go. Crouse is as androgynous and diabolical a female lead as you’ll find, which only enhances her alarming chilliness. “The broad is an addict,” Mike crows to his fellow conmen. Little does he know. “Forgive yourself,” the doctor decides, listening to an elder colleague.

Put obsession and compulsion on a collision course and happy endings slip out the back door. This is an exceptional focused film, one that Roger Ebert astutely called “awake.” It’s an early example of Mamet’s uncanny ability to mate sincerity with parody and emerge with a wholly credible result.